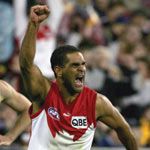 One of our greatest sporting legends caps off a spectacular year with a Grand Final win.

After spending 73 years wandering the AFL premiership wilderness and surviving a tumultuous relocation of cities, 2005 was the year that the Sydney Swans finally got their hands on Australian footballs holy grail, and no Swans player was more happy to bring the flag to the Harbour City than Michael O’Loughlin

Since making his debut with Swans back in 1995, 10-year veteran forward Michael has remained one the club’s leading figures. Throughout his career he has been one of the Swans’ most exciting and beloved players, earning himself the nickname “Magic” for the mercurial way he plays the game.

Michael has become one of Sydney’s sporting icons since moving to the big smoke all the way from his home in South Australia as a teenager, so it’s no wonder that he was whooping up the Swans’ historic victory in September as well as any.

Adding to his Grand Final glory was the fact that Michael has played his entire career in Sydney and was part of the side which came painfully close to winning the flag in 1996 – the year in which Sydney reached the Grand Final but were defeated by the Kangaroos.

Back then, Michael was just 19 years of age and playing alongside the likes of Swans’ legends Paul Kelly and Tony Lockett. While the Swans’ close miss was heartbreaking for Michael, being in the beginning stages of his career he didn’t have the experience to realise just how rarely those types of opportunities come along in a player’s career.

So this year, after years of battling injury and hard work in keeping Sydney competitive, Michael was able to savour the Grand Final success far more.

After being hindered by injuries for much of 2004, Michael finished the season strong and carried his good form into 2005. He kicked one of the goals of the season in the early round and was named in the AFL Indigenous Team of the Century – a great honour for this veteran of the game.

And to add to his list of accolades in 2005, Michael also received the Deadly Award for Achievement in AFL only two days before he lifted the Grand Final trophy.

Most footballers will tell you that a career seems to go by in the blink of an eye. The opportunities for a premiership are few and far between, and for some it may never come at all. The prize for a lifetime of dreams, training and hard work can come down to just one mark or one kick. For Michael, all his hard work and dedication certainly paid off in 2005. Deadly Vibe salutes Michael on his remarkable career and Grand Final success.

The award for Outstanding Achievement in AFL is always one of the most hotly contested at every Deadlys. In 2005, four incredibly talented and worthy nominees were up for the award – Daniel Wells, Aaron Davey, Michael O’Loughlin and Andrew Krakouer.

While there was plenty of new, young talent in the AFL this season, it was a veteran player who got the nod from the Indigenous community as their number one.

Michael has for a long time been one of the most popular, successful and talented of the many Indigenous stars plying their trade in the AFL. Despite the fact he is now looking towards the end of his career, from what Michael showed us all throughout 2005, there is still plenty of magic left.

He received one of the greatest honours of his career this year when he was named as a member of the all time greatest Indigenous AFL side, alongside legendary names such as Graham “Polly” Farmer, Michael Long and Nicky Winmar.

To cap off this memorable year, Michael received his Deadly award two days before the Swan’s victorious Grand Final showdown at the MCG against the West Coast Eagles – one of the most exciting AFL Grand Finals in the game’s history.

Although Michael couldn’t be there on the night to accept the award, he appeared in a pre-recorded thank you message that saw him express his appreciation and delight at winning.

Michael O’Loughlin (Sydney) kicks 6.3 against the Collingwood Football Club to lead the Swans to a win

O’Loughlin, the swans stand out performer of the 2000 season, kicked six goals against Collingwood to lead his side to a win while also providing them with the inspiration they so badly needed this season.