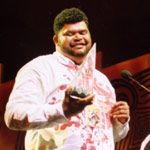 A rising hip hop star gets the shock of his life at the Deadlys.

Lez Beckett was a picture of astonishment as he accepted his award for
Most Promising New Talent in Music at this year’s Deadlys. Grasping his award with one hand and looking with bewildered happiness from it to the audience and back again, he admitted that he never for a moment would win.

“I thought Wire was going to win,” he said several times, referring to fellow nominee Wire MC. Lez’s disbelief and obvious delight at winning the award made for a charming and memorable Deadlys moment.

Lez also spoke of his admiration of the award’s other nominees – Deniece Hudson and Blake Ralph.

Lez is certainly an impressive talent. This hip hop artist, producer, performer and teacher has been spreading the hip hop gospel across Australia for many years. His music has featured in countless compilations and he has performed at festivals across Australia and the world.

Lez is currently based in Sydney, where he has just finished recording a brand new EP with his new crew, Cypher Duem. The EP titled We Were Soldiers is due for release in November of this year. Apart from his performing and recording commitments, Lez continues to run hip hop programs in Indigenous communities throughout Australia.

Lez Beckett is taking his inspiration around the nation

Lez “Bex” Beckett is a one man hip hop machine. Performer, producer, teacher and dancer, Lez has been travelling the country for the past few years, spreading the hip hop gospel to young Indigenous people around Australia.

Lez is currently based in Sydney, where he has just finished recording a brand new EP with his new crew, Cypher Duem.

“Once they’re finished I plan to send them out and see what kind of interest there is,” Lez says. “I had an interview with Universal Music last week as well, so I’m hoping something will come of that.”

Apart from his performing and recording commitments, Lez is continuing to run his special hip hop programs in Indigenous communities around Australia.

“I teach them hip hop and break dance moves, as well as how to produce and record their own music,” he says. “I’ve found that most of these kids don’t need any help with developing lyrics ” they’ve usually already got really great ideas and know how to express themselves.

“Some of the young people from the communities that I return to on a regular basis, like around South West Queensland, Northern Rivers, Geraldton and Albany, have really started to grow and develop into amazing artists.”

Lez understands the importance of hip hop to Indigenous youth, and sees how it helps young people to express their feelings about community, personal hardships and culture.

“It shows them that no matter how hard the odds, you can always climb the ladder.”