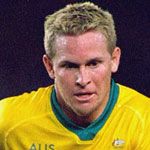 Kasey Wehrman is up there as the best players yet. He made his senior international debut in Brisbane during the Oceania Nations Cup, where he was one of the only players to shine for the Socceroos in what was a disappointing tournament for Australia.
His vision for the game is extraordinary and without him we’d be well and truly up the proverbial creek without a paddle.

Kasey was born in Cloncurry, western Queensland. In the 1996/97 season of the NSL he was voted in as the Under 21 Player of the Year, Rookie of the Year and Supporters’ Club Player of the Year. At the 1997 World Youth Championship in Malaysia, Kasey broke his ankle just before the tournament began which forced him out of the competition for a while, yet this injury has not held him back from proving to be one of the Strikers’ most promising and applaudable young players. Kasey is the current Australian International and Australian U/23 International.