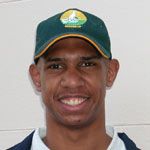 Hailing from Queensland, 17-year-old Joshua Webb has been described as one of the most talented schoolboy athletes in the country.

Currently on a sporting scholarship with Ipswich Grammar, Joshua came to prominence at the 2001 Australian All Schools Championships. After running 54.27 in his heat of the U18 400m hurdles, he fell at the last hurdle in the final, losing his commanding lead to come eighth.

He has since won the U18 400m hurdles at the Australian Youth Championships, and was a medallist at this year’s 2002 World School Games in France.

He runs, he jumps, he runs and jumps again. Joshua Webb is a 400m hurdler with an U18 national title to his name and a silver medal from this year’s World School Games around his neck.

Currently in Year 11 at Ipswich Grammar School, the modest 17 year old ran a personal best (PB) of 53.2 seconds at the Games, held in France, but reckons he could have gone faster.

“The track over there didn’t really suit me,” says Joshua. “It was too soft and bouncy, whereas I prefer a hard track.”

Josh has been doing athletics since he was 11 years old. Before track and field took over his life, he ran in cross-country competitions for Queensland.

“But track and field was something I always wanted to do,” he says.

While he has met great athletes like Jana Pittman and Kyle Vander-Kuyp, Josh says his greatest role model has been his coach, Uncle Ted Rubin Jr.

“Uncle Ted has been a real big help with my career so far. He’s great.”

Joshua first came to prominence at the 2001 Australian All-Schools Championships. After running 54.27 seconds in his heat of the U18 400m hurdles, he fell in the final at the last hurdle, losing his lead to finish eighth.

He has since won the selfsame title at the Australian Youth Championships and now has an international medal to be proud too.

“Competing for Australia at the World School Games and winning a silver medal was a great feeling. It didn’t really worry me if I won the race or not. As long as I ran a personal best I would be happy with my performance.”

And that’s exactly what he did, shattering his previous PB by one second.

Training four times a week for two hours a day, Joshua’s workload is about to increase with state titles coming up at the end of this month, and the nationals in December.

“I’m really looking forward to those competitions, but my main focus is to represent Australia as much as I can and to make the 2006 Commonwealth Games in Melbourne.”

In recognition of his athletic potential, Joshua Webb has been nominated for Most Promising New Talent in Sport at this year’s Deadlys. So does he think he’ll win?

What is your full name:
Joshua Webb.

Were you born there:
No, I was born in Grafton, NSW.

What do your friends call you:
They call me a couple of different names ” “˜Black Magic’, “˜Webby’ and “˜Spider’.

What was the first sporting event you ever saw:
Rugby league.

When did you start playing sport
When I was about eight years old.

If you could form a team with your choice of players, who would they be and what would you call it:
It would be a relay team with myself, Courtney McLeod, Jana Pittman and Kyle Vander-Kuyp.

What sport do you follow in your spare time:
Rugby league.

Name a song that most describes who you are:
“My Island Home” by Christine Anu.

What CD do you have in your CD player at the moment:
Sister Act 2: Back in the Habit soundtrack.

Who is your favourite Aboriginal or Torres Strait Islander musician:
Christine Anu.

Most fulfilling experience in your life so far:
Representing Australia at the World School Games in France.

What is your best asset:
My running.

What would you most like to change about yourself:
Nothing, I’m happy the way I am.

Who’s real deadly in your eyes:
My Uncle Ted Rubin.

If you could have anything printed on a T-shirt that you had to wear for the rest of your life, what would it say:
Try Your Best At What You Do.

What’s your favourite part of Australia:
Riverview and Grafton.

You’re invited to a fancy dress party. Who or what do you go as:
Superman.

Make one prediction about 2002:
Run a new personal best.

Where do you see yourself in 10 years time:
Representing Australia at the Olympic Games.