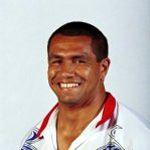 John Simon is one man who’s certainly running hot in 2001 with some star performances early in the season.

Against the Dragons in round two, the five-eighth was in sensational form, setting up tries, crunching defences and even scoring himself to lead the Wests Tigers to a 26-24 victory.

Following his courageous effort in round two, John had an even tougher match the following week against his old club the New Zealand Warriors. But he was on a roll, leading his team once again to a 29-10 victory and scoring the try of the match.

No doubt John’s ample experience is one reason why he continues to play great football. He has played over 200 NRL matches including 120 games with the Steelers, one test for Australia and four State of Origin matches.

John has played with Parramatta, Sydney City and the Warriors over the years but has now found a new home with the Tigers. Luck, Tigers because John has been performing better than ever.