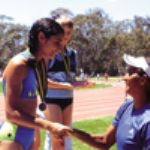 WHEN YOU’RE THE DAUGHTER OF A FAMOUS athlete, one doesn’t have to look too far for motivation or support when tackling a sport. Jessica Peris, the eldest daughter of hockey player-turned-runner Nova Peris, is naturally talented in her own right. At only 13, she’s already making a name for herself on the track. In 2001, she won bronze in the 200m and silver in the relay at the nationals. The following year, she scored a consecutive bronze in the 200m, and picked up silvers for the 100m and long jump, as well as a gold medal for the medley relay.

Jessica participated in Little Athletics like any exuberant child. For fun, she began to train and run with her mum in 1996, the year Nova became the first Aboriginal to win Olympic gold.

Running was always something Jessica enjoyed, but by 1999 she was seriously running and training with her mum, who had switched over from hockey to the track. Jessica is now focused on improving her times. She trains side-by-side with her mother and her stepfather, the 400m specialist Daniel Batman. Their focus and international exposure has been inspiring for Jessica ” she says they are her biggest role models.
Be sure to look for Jessica at the nationals in November. As well as her regular events – the 100m and 200m – she says she will also aim for the 400m and triple jump.