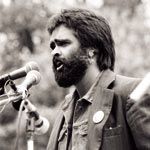 Many of us have seen those powerful black and white images of protests during the 1960s and 70s. Pictures depicting passionate, young black men and women, marching in unison, holding flags and banners aloft while raising their fists and shouting their slogans. Awe-inspiring images that take us back to an age when the Indigenous youth of the land were well and truly “on the move”.

Alongside other legendary names such as Charles Perkins and Chicka Dixon, one man whose voice, pride and passion would come to symbolise those turbulent days of Indigenous activism more poignantly than any other was Gary Foley.

He was a champion and pioneer of the Aboriginal Black Power movement, and remains one of Indigenous Australia’s most respected and beloved heroes.

“When I was 17 the Redfern Police gave me quite a good kicking,” says Gary, when asked what influenced him toward a life of activism.

“Then a week later I picked up the autobiography of Malcolm X, whose politics had a great impact on me.”

Around this time the winds of change were certainly sweeping the nation, as significant numbers of young, politically astute Indigenous people were gathering and uniting, particularly in communities like Redfern, Fitzroy and South Brisbane. In what was an exciting and desperate age of struggle and expression, like-minded Indigenous people of the time united in the demand for change.

From this moment on, Gary would organise some of the most significant and historic protests in Australian history, including the 1971 Springbok tour demonstrations, the Aboriginal Tent Embassy in 1972, the Commonwealth Games protests in 1982 and the Bicentenary protests of 1988.

“They all stay strong in my mind,” says Gary, reflecting on some of the largest protests Australia has ever seen.

“But it’s the tent embassy that holds a special place when I look back on it all, and that’s because its establishment remains as the most significant action taken by Aboriginal people in 200 years of occupation.

And while the turbulent days of the 60s and 70s took the Indigenous cause forward in leaps and bounds, disappointingly many of the important advances this era brought about have since been diminished.

“In the last twenty years we have seen the emergence of a new style of Aboriginal political leadership,” expresses Gary.

“And I would put it to everybody that the last 20 years of conservative representation has provided no gain.

“In fact, we have less land rights today then what were outlined in the Northern Territory Land Act of 1972.

“And the blame must go to the Aboriginal Leadership that has worked with the Keating and Howard governments.

“The important issues facing Indigenous people today are what they have always been, land rights, justice and native title,” explains Gary.

“When we were at the Tent Embassy, screaming out our slogans for land rights, we were talking about free hold title, real land ownership.

“The main aims today for Aboriginal people must be political and they must be about self determination.”

So will we ever see another age of such strong Indigenous protest and activism as we saw in the 60s and 70s?

“Well, we have to,” answers Gary matter-of-factly, “because if we don’t, Aboriginal Australia will effectively be wiped out.

While Gary’s prognosis may be bleak, it is a hard truth, presented by a man who has never minced words, and in this instance his fundamentals cannot be ignored or denied. The Indigenous battle in Australia has always been one of a desperate struggle for survival, and nothing in the last twenty years has done anything to change this stark reality. However, as Gary points out, there are many things working in the favour of young activists today. One of which is technology, the type of which he and his friends could only have dreamed of utilising. But more importantly, the most important weapon in the struggle is history, and hope lies in the generations to come.

“The weaponry for the battle is better than ever and we now need a generation of Aboriginal people who have a real understanding of their own history and of politics, not taught to them by white fellas. Only through this will they know what to do,” says Gary.

” History is the great teacher. The lessons are there.”