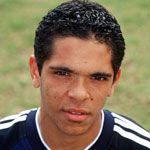 For most soccer players the dream of one day making it to the World Cup is just that – a dream. But for 18-year-old Fred Agius, that dream came true last September when he competed in the world under-17 championships in Trinidad and Tobago.

Before a crowd of 25,000 in Port of Spain, Fred kicked the only goal of a match between Australia’s under-17 side, the Joeys, and championships hosts Trinidad and Tobago.

According to The Sydney Morning Herald, “Agius’s thumping 30-metre free kick on 55 minutes proved the Joeys’ winner – a deserved goal for the South Australian who tormented the Trinidadians throughout.”

Of course this wasn’t the first time he’d played for Australia. Fred was also a big presence at the Oceania qualifiers in Samoa in 2000, and at a home-and-away series of qualifiers against New Zealand early last year. To date he has represented Australia in 12 matches, scoring a whopping 11 goals in the process!

Freddy Frog (as his friends call him) started playing soccer when he was five years old because his older brother was fond of the sport. “I remember playing soccer on Saturdays and AFL on Sundays,” he recalls.

All that practice obviously paid off because, after a stint with the Joeys, Fred is now playing for the Olympic Sharks in the National Soccer League. Not only that, but he managed to score a goal in his first game of first-grade competition.

“It was great to score a goal in my debut game, because it was against my old team Adelaide City, and in front of my family and friends!” he laughs

Originally from Adelaide, Fred has been living in Sydney for five months now. “It was hard to move away from home, especially for the first month or so, but now it’s alright. When I first came to Sydney the only person I knew was my cousin.”

Fred believes his best asset on the field is his character. “I’m a bit of a joker on the field. That said, I always know when it’s time to get serious.”

Currently in Year 12 at Caringbah’s Endeavour Sports High School, Fred is doing what is known as a Pathways course. This means that he only attends school for one lesson a day, but over two years so he can concentrate on his sport.

And he sure is concentrating, training twice a day, every day, except Sundays. “My goal for this season is to play all year in the top side. But my career goal is to hopefully be picked by a club overseas and earn the big bucks!”

Named Junior Sportsman of the year at the 2001 National Aboriginal & Torres Strait Islander Sports Awards, this bright young talent looks set to go leaps and bounds over the next few years.

Hop to it, Froggy, and Vibe wishes you all the best!

What is your full name:
Fredrick Robert Agius.

Where are you from:
Adelaide, SA.

Were you born there:
No, I was born in Adelaide.

Are you the oldest, somewhere in the middle, the baby, or an only child:
Middle.

What do your friends call you:
Freddy Frog.

What was the first sporting event you ever saw:
An Indigenous sports carnival in Adelaide, where they had netball and AFL.

When did you start playing sport:
I started playing soccer and AFL at the age of five.

If you could form a team with your choice of players, who would they be:
Rivaldo, David Beckham, Roberto Carlos and my brother Raymond.

What’s the funniest thing you’ve ever done on a sports field:
I don’t think I have.

What sport do you follow in your spare time:
AFL ” I follow Port Adelaide Power and Essendon Bombers.

Name a song that most describes who you are:
“Black Boy” by Coloured Stone.

What CD do you have in your CD player at the moment:
Bone Thugs N’ Harmony.

Who is your favourite Aboriginal or Torres Strait Islander musician:
Coloured Stone and Warumpi Band.

Most fulfilling experience in your life so far:
Scoring a goal in the World Cup and lifting up my playing shirt to show my Aboriginal T-shirt to the crowd.

What is your best asset:
My personality.

What would you most like to change about yourself:
My height.

Who’s real deadly in your eyes:
Charlie Perkins, and also my Aunty Pat and other family.

If you could have anything printed on a T-shirt that you had to wear for the rest of your life, what would it say:
I’m black and proud of it.

What’s your favourite part of Australia:
Point Pearce in SA ” I like to go there to relax and fish.

You’re invited to a fancy dress party. Who or what do you go as:
Michael Jordan.

Make one prediction about 2002:
Port Adelaide to win the AFL grand final.

Where do you see yourself in 10 years time:
Playing overseas for either Arsenal or Barcelona.