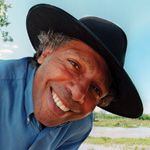 With the beautiful Australian summer kicking into high gear, it’s that time of year when many us take a well-earned break from work or study, pack our bags and head for our favourite holiday spot. And what better man to talk to about holiday destinations and travel than the biggest jet-setter of them all, Ernie Dingo.

For one of the most down-to-earth television personalties around and a bloke who simply loves to have a yarn, Ernie hardly gets a spare moment to sit, talk and catch up with friends and fans. In fact, even catching Ernie for a quick phone interview can be a daunting task, thanks to a hectic travel itinerary that has him ducking between cities, states and time zones as the long serving reporter on Channel 7’s The Great Outdoors.

“Overall it has just been a wonderful experience,” says Ernie about his 15 years of work on the program. “The great thing about it is the opportunity it has given me to travel to these fantastic places, and you know, blackfellas just don’t usually get the chance to travel around like that.”

Ernie is the longest serving reporter still working on the show, and during those 15 years he has circled the globe, stayed in more hotels and been through more airport terminals than he can remember. And while he has visited the most well-known and popular tourist destinations around the world, his favourite spots are always those closest to home.

“I’m into Australiana, you know,” he says. “The desert, the springs, the Kimberley, Arnhem Land, being in North Queensland just after the rain season when everything is so vibrant.

“Then you have places on the New South Wales south coast where you can just sit on some amazing beach. I love that as well – I’m a saltwater man so I love to be around saltwater country.”

Apart from Australia’s natural beauty, Ernie has also garnered a great appreciation for the type of lifestyle Australians enjoy. He cites this as being one important thing that sets us apart from the rest of the world.

“We don’t have people walking around with guns in Australia,” he says. “I think that’s a major thing that makes our country such a great place to live.

“I just got back from Africa, where I was staying at a place called Gondar in Ethiopia. One night I got out of bed to have a look out the window. I pulled the blinds open and surprised some soldiers who were standing beneath the window. The next thing you know I’ve got machine guns pointing at me!

“I’ve been in Israel where no matter where you go you have a team of armed guards with you. Not only protecting you but also protecting the people from you in case you might have a bomb. It does really make you appreciate what we have at home.”

Having travelled so widely around Australia and the world, you would think there wouldn’t be any places left that Ernie hasn’t already seen. But surprisingly, there are still a few spots on his travel wish list he hasn’t got around to.

“I want to go to Cootamundra in July,” Ernie says with conviction.

“I’ve been listening to John Williamson sing that bloody song (Cootamundra Wattle) for so many years now, so I have to see the wattle at Cootamundra in winter.”

Jet-setting around the world for The Great Outdoors keeps Ernie away from home for roughly two weeks out of every month, which means his schedule doesn’t leave much time for other pursuits, such as film.

“Bloody oath, I’d love to do more films,” he says. “But with the amount of time I spend away with the show it just makes it impossible. Even to do a stage show you need five weeks for rehearsal and four weeks for performing.”

However, it’s the lengthy stretches spent abroad and away from family that’s the hardest aspect of the job. Ernie has two young children – 11 year-old son Jurra and 12 year-old daughter Wilara – and juggling work and being at home for his kids has been major balancing act.

“I’ve been away so much during their childhood that I really have missed a lot of them growing up,” he says. “Each time I go away and come back they’ve grow up that little bit more.

“That’s the difficult part, you know? I just jeep thinking about that Cat Stevens song, Cats in the Cradle, and so I really make the most of every bit of time I get to spend with them.”

One of the few times during the year when Ernie does get to spend some quality time with family is over the Christmas/New Year break. And while he’s still travelling these holidays, this time around he’s taking the whole mob with him.

“I get a four week break over Christmas,” he says. “So I’ll be going camping with the kids. Then after that we’re heading to the Malaney Festival. Then we’re going to fly over to Western Australia to catch up with family, and then it’s back to work.”

After a lifetime of performing, acting and entertaining on the stage and screen, becoming a true Australian icon in the process, Ernie is still as passionate and driven as ever. And with the shortage of Indigenous television personalities, Ernie isn’t about to step away from the cameras just yet. At least not until he can help usher more Indigenous talent into the industry.

“We need to get more black faces on TV,” he says. “You just don’t see enough of it unless you watch something like The Deadlys, and even that was pushed back to late at night on SBS.

“A few years ago we had this really good influx of Indigenous actors breaking into the industry, but now it seems like nothing has really followed on or come from it, and that’s something that really disappoints me.

“People see me out and about and they come up and say, ‘oh, you’re a credit to your race’. I just find things like that really patronising. I think to myself, well you obviously don’t watch football, or hockey, or netball or just about any sport. It’s simply because I’m the only blackfella they see on television.”

‘The man’ of the moment

When Ernie Dingo bounded out onto the stage to open this year’s Deadly Awards, it was clear that we were all in for an entertaining night and that Ernie was as excited as anyone.

To put it plainly, at this year’s Deadly awards, Ernie Dingo was ‘the man’. Not only did Ernie host the 2004 Deadlys with consummate professionalism, humour and emotion, he also collected an award of his own, winning the Deadly for Outstanding Achievement in Film and Television.

After a stellar career in film and television that began in 1978, Ernie has gone on to become one of Australia’s most recognisable and liked screen personalities. In 1997, Ernie was named one of Australia’s National Living Treasures and he was also Aborigine of the Year in 1994.

No stranger to awards and accolades, Ernie was still clearly moved by his Deadlys win, which he dedicated to his mother who passed away last year.

Born on a cattle station in Western Australia – delivered by his own grandmother, no less – Ernie Dingo has become something of a household name.

A Yamitji man from freshwater country, Ernie first came to prominence in Bruce Beresford’s The Fringe Dwellers, a powerful film that explores the life of Aboriginals on the “fringe” of white society.

Since then he has been involved in film, television, dance and theatre, appearing in everything from Crocodile Dundee II and Dead Heart to Blue Heelers and Fast-Forward.

“I broke all the rules of Aboriginal protection to get to where I am,” says Ernie. “I left behind my family – my support network – to chase a dream. That’s me, always chasing rainbows.”

Voted National Aborigine of the Year in 1994 and a National Living Treasure in 1997, the man with the cheeky grin and Akubra hat is now the face of the popular Channel 7 lifestyle program, The Great Outdoors.

“I’m always trying to find avenues through Channel Seven to get the blackfellas on telly more,” he says. “But you gotta deal with the suits, and they see it as a risk – these days, everything is money-orientated.”

Ernie is also a patron of the West Australian Youth On Health Festival, or YOHFest. This is a State-wide drama, dance and art festival that requires high school students to write, choreograph and perform their own play or dance based on a health issue. Ernie has been giving his time voluntarily to the festival since 1998.

“It’s incredible, the amount of potential these kids have,” he enthuses. “But I have to brace myself when I head up there – as soon as I arrive I’m 20-deep in kids, and boy do they love to tease you!”

Ernie Dingo was born in 1956 on Bullardoo Sheep Station in Western Australia. A Yamitji man, Ernie got his surname from his grandfather who was a dingo trapper.

In 1979 Ernie was offered his first acting role in the Jack Davis play ‘Kullark’. Since then, he has worked nationally and internationally in television, film and theatre.

In theatre he has performed in the highly acclaimed productions of Bran Nue Dae, Visions and No Sugar. He has had numerous film roles including leads in Dead Heart and Bruce Beresford’s The Fringe Dwellers.

More recently he has become a household name on the small screen, appearing in shows such as Blue Heelers, The World Around Us and Getaway.

Ernie has been awarded an Order of Australia and three AFIs. In 1994 he was named NAIDOC Aboriginal of the Year and in 1997 was voted a ‘National Living Treasure’ in a National Trust poll.