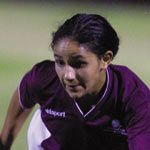 Putting the boot in

She’s waltzed with the Matildas, played Soccer in the outback and made her mark in touch. Vibe scores time with Belinda Dawney, one of Aussie soccer’s rising stars.

Belinda Dawney is a woman of many talents. She’s been a champion touch football player, a state sprinter and a representative softball player. Is there anything this gal can’t do?

“Well, I can’t swim to save my life,” the versatile 22-year-old admits. “But you can’t have everything!”

Yet if there’s one sport that Belinda stands out in more than any other, it has to be soccer. She’s been playing the game since she was 15, when a friend asked her to come along for a local team match.

In the years following that fateful day, Belinda played club soccer for two years before being selected for both the NSW and national schoolgirl teams in 1998. In 1999, she was picked to join the Queensland Academy of Sport team, QAS Sting, and in her first season with the squad, the talented forward was named the national league’s highest goal scorer.

During this time, Belinda was also playing touch football, competing at state level before gaining selection to the Australian under-18 schoolgirls’ touch football team.

But with the hectic training schedule that both teams demanded, something had to give, and so Belinda made her choice – to stick with soccer.

“It was becoming an Olympic sport, and that really interested me,” Belinda says. “Then, in early 2000, I was asked to go to the Australian Institute of Sport for a Matildas’ (Australian national women’s soccer team) training camp.”

This was a big deal. The training camp formed part of the Matildas’ Olympic selection process. After a week at the camp, the coach asked Belinda if she wanted to come back full-time. She had been picked for the team.

With only seven months to go until the Sydney Olympic Games, the pressure was on to train hard, and Belinda gave it her all. But her hopes were dashed when she came down with glandular fever in May, forcing her to quit the team.

“I decided to take a year off soccer,” Belinda says. “And once I was well enough, I went back to touch.”

In January of 2001, Belinda played with the Australian schoolgirls’ touch team at the Youth World Cup in New Zealand, where they won the competition. In 2002, she started playing soccer with QAS Sting again. The team made it to last year’s grand final, but lost to NSW.

Earlier this year, Belinda was once again selected to join the Matildas at their Olympic training camp. Could this be the chance that she missed out on last time?

“On the second day of the camp I injured myself, and this stopped me from fully participating in the training,” Belinda explains.

On day eight, the Matildas’ coach, Adrian Santrac, told Belinda she hadn’t made the team.

“He told me that I didn’t get picked because I wasn’t trying hard enough,” Belinda says indignantly. “He said my attitude wasn’t right!

“I was really disappointed. I had been trying hard – trying my best. It really damaged my confidence.”

Belinda decided to take another year off soccer to give herself time to rebuild her confidence and reassess her options. These days, she is working full-time at a pathology lab, where she is training to become a lab assistant.

“I’m only 22, so I may have a shot at the 2008 Olympics yet,” Belinda admits. “But at the moment I’m just enjoying the break, working hard and saving some money.”

On top of this, Belinda has also become involved in the Soccer in the Outback program, an initiative of the Australian Sports Commission, the Indigenous Sport Foundation and the Laureus Sport for Good Foundation.

The program is designed to take soccer skills out to remote communities, not only helping kids to fulfil their potential, but also training coaches and officials in the rules of the game.

“I went to Mount Isa with the program in April,” Belinda says. “And I had an absolute ball!

“I got to work with kids from pre-school age up to about Year Seven, and I really felt like I made an impact. I’ll definitely do it again in the future.”

Although she’s out of the limelight for now, it’s unlikely that Belinda Dawney will stay in the shadows for long. Keep your eyes peeled for this powerful player because – who knows? One day you may well be cheering for her as she scores for her country at the Olympic Games.