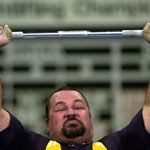 Anthony Martin grew up in Rosewood Queensland where he started weightlifting through his school. He got into weightlifting because he was strong from playing other sports like shotput, discus, basketball and rugby union.
His first major career win came when he was 15 in the State Championship under 16 Super Heavyweight division. He had only been lifting for a coulple of months, he was very surprised to win!

He is the first Aboriginal to compete for Australia in weightlifting and he is doing a great job just check out his records held and sporting achievements.

His lifestyle offers lots of over seas travel which he loves especially going to Europe though the one fallback is that he cannot have a job because he is away so much, this seems to be the restriction that his commitment to sport has put on him. I think his sporting job is big enough!

His training consists of lifting weights 6 days a week for 2 hours in the morning and 2.5 hours in the afternoon. His diet consists of just about anything but not too much take away.
His preparation for a major event consists of a change from his usual 2 month cycle to a 4 week cycle.

His greatest inspiration continues to be his coach Mike Keelan.
Anthony’s dream of ultimate achievement in sport is of course to be an Olympian so keep your eyes peeled in Sydney in September. When asked how he feels about his culture he replied ‘ I am proud of who I am and where I’m from”.

QUEENSLAND U16, U18, Open
AUSTRALIAN U16
OEANIA Open
COMMONWEALTH Open