Earlier this year Deadly Vibe caught up with the sprint sensation, Patrick Johnson who literally appeared out of thin air and onto the athletic track. 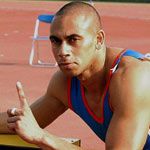 Now he is possibly the most amazing success story in Australian athletics.

Patrick only started in track and field in October 1996 when he decided to have a try at the 100m at the Australian University Games in Canberra. Patrick ran 10.49 to win this title and was immediately offered and AIS scholarship which came just 12 hours before Patrick was to sign a contract to play Super League.

Since then Patrick has continued with sprinting with a win over 100m at the Optus Grand Prix in Perth running 10.27 (that was only the third time he had ever run 100m) man then stepped up to 200m.

He has improved his 200m personal best from 21.23 to 20.54 in just four races whilst along the way finishing less than a meter from Olympic 200m finalist Patrick Stevens in two races.

Patrick ran his 200m personal best in the final of the national championships and was subsequently selected in this event for the World Championships in Athens this year.

This is an amazing achievement from Patrick, a novice in athletics which came after just three months of coaching.

We will definitely be catching up with Patrick this year to see how those times are progressing in the lead up to Sydney 2000.