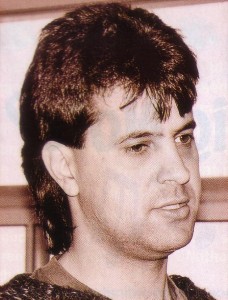 Where are you from? Melbourne Victoria

What is your band called: Blackfire

How did you get into music? By persistence and luck

What is the worst outfit you have ever worn? School Uniform

If you could travel anywhere in the world where would you go? Canada and Yirrakala N.T.

If you could be on any TV show, which one would you be on? Count Down – revisited with me as the Host.

What would you be doing if you weren’t a musician? Working still at Songlines Music

Which part of your body would you most like to change? A decent set of teeth would be Deadly

Do you have a pet? A dog called “Libba” after the AFL Football Star Tony Liberatore

Do you have a partner? No but I’m open to offers

What’s the best meal you can cook? A roast dinner

What’s your favourite movie? “Cry Freedom” & “In the name of the Father”

What is your worst habit? Too straight forward at times

What has been your greatest achievement? Playing and touring nationally and internationally with Blackfire

Where do you get your hair cut? Stop & Style in St. Albans, Melbourne

When you were a kid what did you want to be when you grew up? An AFL football player

If you could have one wish what would it be? To be the first black Prime Minister of Australia

Do you have a nickname? What is it? Hanno (Gummarang – Skin Name)

What’s the most embarrassing thing that has ever happened to you? Getting caught out playing up on an old girlfriend

How would your best friend describe you? Honest and Loyal

Have you ever been in love? Too many times for little reward, I’m a sucker for a pretty face.

Which element do you identify with most? Fire, water, earth or air? “Fire” (Blackfire)