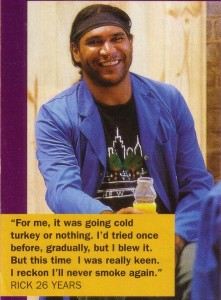 When you smoke you are doing damage to your entire body. The areas of your body that are the worst effected by smoking cigarettes are your lungs, arteries and especially your heart.

Some people who smoke know the damage smoking is doing to their lungs. They know that they feel short of breath and puff when they walk up a hill or they can’t run as fast as they used to.

Other people think that smoking won’t hurt them or that they will be able to give up before there is any damage. The truth is that every cigarette you smoke damages your lungs.

As soon as you start smoking these bad things start happening inside your body.

Blood and your heart

Many people who smoke think that they can give up if and when they start getting sick from smoking. New studies show the damage on your body caused by smoking starts very early. The damage to your body starts with your first cigarette.

Smoking makes your blood vessels and blood sticky which allows fat to get stuck inside, this is very bad. This starts as soon as you start smoking and gets worse with every cigarette.

1. Smoking is the largest single preventable cause of death and disease in Australia. About 50 tobacco related deaths happen each day, 350 each week and around 18,000 each year.

2. Every month tobacco companies lose at least 12,000 customers in Australia. Ten and a half thousand people quit and 1,500 die of diseases caused by smoking.

3. 25% of the Australian population are regular smokers of which 80% have tried to quit at least once.

4. A person who smokes 20 a day and started smoking in their teens will have breathed in about a kilo of tar in their smoking lives.

5. Tobacco smoke contains over 4,000 chemicals many of which are highly toxic and over 40 of that are known carcinogens (things that cause cancer). There are no safe ‘low tar’ cigarettes and no known safe level of smoking.

6. Male smokers may produce less sperm and their sperm may have more abnormalities than non-smokers. Woman who smoke take longer to get pregnant and are more likely to have a miscarriage.

7. Successful quitting usually takes a number of attempts with 40% of slip-ups occurring in the first three days and another 34% in two weeks. 80% of people who slip-up start smoking again.

8. After quitting the body can get rid of nicotine and carbon monoxide within a few hours and nicotine by-products within a few days. Blood flow to the limbs improves within two months and lungs regain the capacity to clean themselves within three months.

9. Women increase the probability of heart attack, stroke and other cardiovascular disease about tenfold if they smoke as well as use oral contraceptives (take the pill).

10. More than 57,000 reports worldwide have examined the connection between cigarette smoking and disease making it the most extensively documented cause of disease ever.