Nestled in bushland behind the Carindi Beach is the property of Ian and Manda Gentle, owners and creators of Bakarindi Bush Foods and Native Cuisine.

Six years ago, the couple moved from Woolgoola to pursue their passion of native plants on their very own property that had been in one of their friend’s family for 100 years.

“My husband and I had a passion for growing native foods, and then we transferred into bush foods about six years go. We bought a property at the back of Carindi beach hence the name, Bakarindi,” Manda explains. 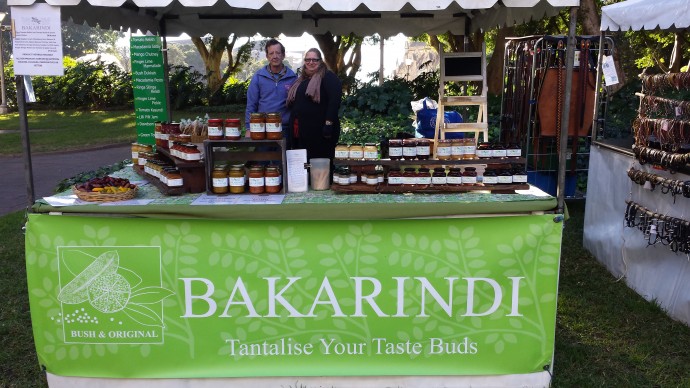 When Ian and Manda Gentle explored their passion for growing foods, ‘Bakarindi’ was born.

Starting off by planting just three finger lime plants, along with some other native and exotic plants, Ian and Manda now have over 120 finger limes, 60 riberries and a small patch of aniseed and myrtle.

Manda soon began experimenting with the plants creating preserves, sauces and chutneys of her own. Now, three of her creations have become award winners at the Sydney Royal Fine Food Fair.

“Each product that I have, like the Macadamia Satay, took me about a month to get it right. I had the idea that it would work but then I had to experiment, and I finally nailed it and took it to a chef friend of mine,” Manda says.

“He said you’ve nailed the flavour, the texture is a bit grainy but as soon as he said that I knew what I had to do to fix it and, since then, it’s been an award winner.”

Her Ringa Stinga Relish which has a tomato and onion base is made with Habanero chillies and won the first award for the couple at the Sydney Royal Food Fair in 2012.

Last year their classic Tomato Relish won bronze alongside the Macadamia Satay, and this year the duo plan on taking out silver with the same creation.

“It just missed getting silver, so we’ve just re-entered it this year to see if we can get the silver,” Manda says.

So which is her favourite?

“The good old fashioned Tomato Relish, because it is a good all-rounder. Great with anything,” Manda says.

“I like the Macadamia Satay because it is unique, and we have a new one out called bush butter which is made from the Australian native finger lime.”

In the kitchen, Manda cites husband Ian as her greatest inspiration, adding that they work very well together.

“We kind of make a good team because when we’re in the kitchen I’m the boss, and when we’re out in the paddocks he becomes the boss, so it’s sort of shared duties,” Manda says.