NRL Round 17 Preview with Jake Keane

With all the off-field news this week being dominated by some Todd Carney bathroom antics – it will be good to get back to focusing on what the players are up to on the field with this weekend’s round of matches.

Manly have now emerged as Premiership favourites and outright competition leaders, a position the Bulldogs held only a month ago. Since then the Bulldogs season has been on a slide, with the loss of their halves pairing to Origin, no doubt contributing. The dogs will again have to do without their 6 and 7 for this match against a Sea Eagles’ outfit that have steadily improved over the course of the season, and are currently enjoying a three-game winning streak. The Sea Eagles are coming off their second win of the year over reigning Premiers, the Roosters, and enter the match less affected than their opponents by Origin commitments. With both teams looking destined to finish near the very top of the ladder, this should be an interesting and hard fought encounter. 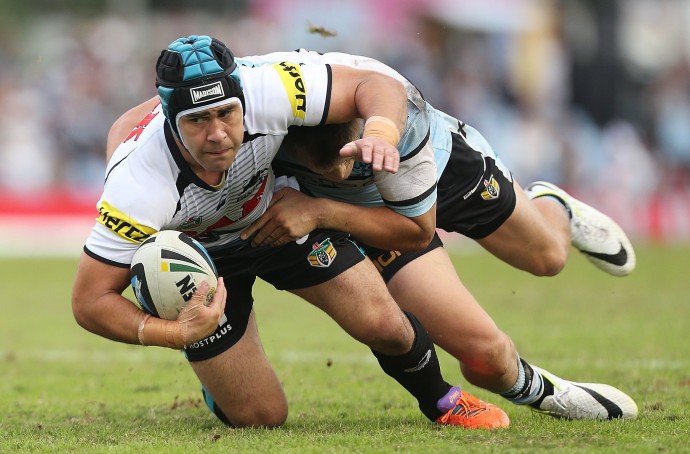 A rejuvenated Jamie Soward has been brilliant for the Panthers all season after returning from a short stint playing in the English Super League. Jamie will be in action this weekend when the Panthers taken on the Tigers at Leichardt Oval. Photo: Getty Images.

Not so long ago, the Dragons were down and out with the toughness of their forward pack being questioned. A change in coach and the arrival of Benji Marshall has since sparked the club to a form turnaround, and this weekend they chase their third win in a row when they face the Cowboys at home. The Cowboys on the other hand, started the season slowly but are starting to build momentum. They enjoyed a great, tough, gritty win over the Rabbitohs last week that will give them worlds of confidence.

Most pleasing for the North Queenslander’s was the way they matched and out-toughed a robust South Sydney forward pack, that has manhandled most other packs this year. However, the Cowboys have a less than impressive away from home record, and will lose the services of Tamou, Scott, Tate and most significantly, Thurston, all on Origin duty. On the other side of the field, the Dragons lose Merrin and Dugan. The Cowboys will need their young players filling in for the regular first graders to come ready to play if they are to win this match, on the road, against a rejuvenated Dragons.

On Saturday night the Roosters take on the beleaguered Sharks who are dealing with all sorts of dramas at present. Their stand in coach, Peter Sharp, has quit, there was an alleged player walkout at training during the week in reaction to the Todd Carney incident, and all of this on the back of the dark cloud already hanging over the club from the ongoing ASADA investigation. If they can somehow spring a victory here, it would no doubt be one of the major upsets of the season.

The battle of Sydney’s west takes place on Sunday afternoon when the Panthers travel to meet the Tigers. Both these clubs are vastly improved in 2014 and this match shapes to be a real tough battle. The Panthers are coming off their first loss after a five game winning streak, while the Tigers won in a thriller against the Raiders last week. Both teams will field close to full-strength teams, with Farrah being the major missing player for the Tigers, which may be enough to tip the result in the Panthers favour.

Finally, the Rabbitohs face the Titans on Monday without the services of their Origin stars, Greg Inglis and Ben Teo. The Titans will be missing Greg Bird, Nate Myles and Dave Taylor. Souths have generally performed well over the Origin period without their stars, and after a last start loss, Coach McGuire should have them fired up for a good performance. It’s hard to see them losing.