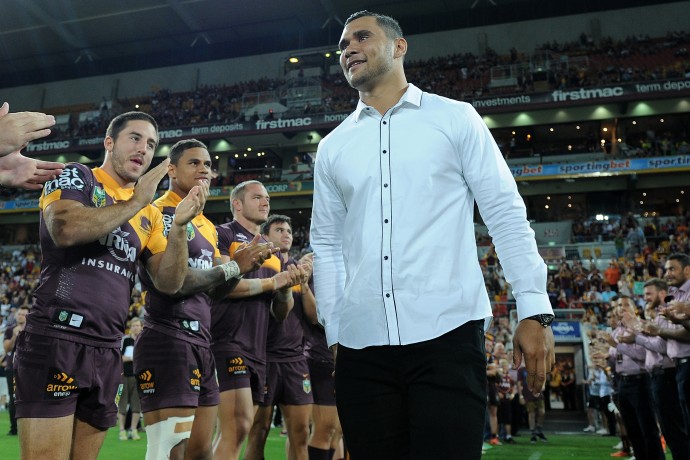 Last week a young man whom we’ve all enjoyed watching play footy over recent years announced his retirement from the game due to a career ending ankle injury. In only four seasons of NRL football, Jharal Yow Yeh stamped himself as one of the league’s elite backs, starring for the Broncos and earning selection for Queensland and Australia. During the Broncos match at Suncorp Stadium last weekend, Jharal made a lap of honour and had his jersey retired, which was great to see. Vibe Wire and Deadly Vibe magazine wish Jharal all the best in his future endeavours.

Sticking with off field news, and the 2014 season for exciting young Canberra winger, Edrick lee, has been cut short after the lanky Torres Strait Islander suffered a season ending foot injury in the Raiders’ loss to the Titans last weekend. Edrick enjoyed a spectacular debut year in 2013, and we were all looking forward to seeing what he would produce in 2014. Let’s hope we see Edrick bounce back next year.

Now on to this week’s footy and the match of the round is undoubtedly Friday night’s Grand Final replay when the Roosters face Manly. These two teams met on four occasions in 2013 with the Roosters winning all four matches. Manly were very lucky to escape with a last minute game winning try against the Eeels last round, and were physically dominated by the Eels in the final quarter of the match. 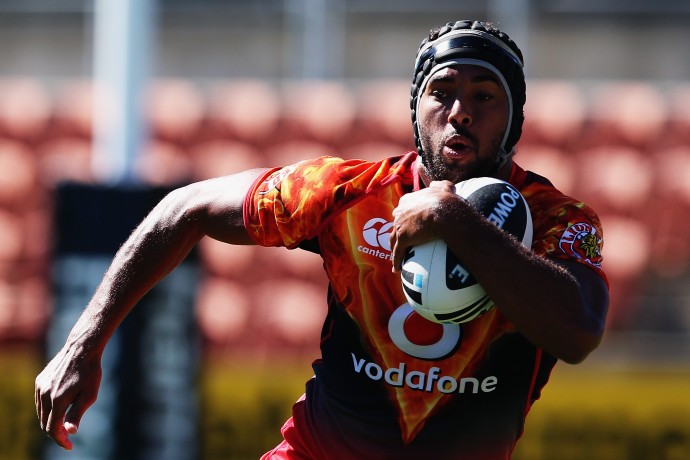 The Roosters, on the other hand, have bounced back from their lethargic Round One performance to win two games in a row. Based on current form, the Roosters will clearly go into this match as deserved favourites; however, if past history is anything to go by, matches between these two clubs are generally close and always entertaining.

Over in New Zealand, Dane Nielsen will become the latest Aboriginal NRL footballer to breach the 100 games’ mark when he runs out for the Warriors in their match against the Tigers. The Tigers’ confidence will be soaring at the moment after their mauling of the Rabbitohs, while the Warriors are themselves coming off a confidence boosting win over the Cowboys. This is a hard game to pick, but if the Tigers can reproduce the enthusiasm and energy levels of their last round performance, I think they will win this one. The emergence of some bright young talent in the form Luke Brooks and James Tedesco seems to have given the club a new edge.

On Saturday, Chris Sandow will make his return to NRL footy when the Eels take on the Panthers, the Western Sydney derby. If these two clubs were playing in Round One I would have tipped the Panthers without hesitation, but after the Eels’ strong showing against Manly and solid start to the year, this is shaping as a real battle. Chris has shown a lot of character to fight his way back to the top grade – I hope he has a blinder. 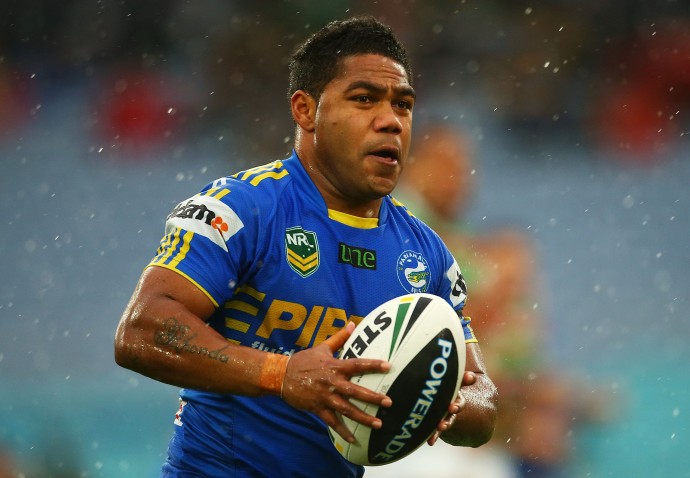 In Round Three the Rabbitohs produced as ugly a performance as we’ve seen from them in a long while. Dropped balls, head high tackles, soft defence – it was an absolute embarrassment for a club that just two weeks prior were considered the Premiership favourites. So bad in fact, rumours have been building there is something wrong behind the scenes at the club. Senior players have spoken out in the media this week to defuse those comments, however, the strongest message the team could send to their fans to prove all is well in Redfern, is by way of a strong win over the Raiders this Sunday afternoon.

The Raiders were no easy beats last year, and nothing has changed for 2014. They have a crop of talented young Indigenous players, and keep your eyes on Jack Wighton who Ricky Stuart has moved in to the halves this season after a great 2013 playing in the centres. The Rabbitohs will be without their injured hooker Isaac Luke, a player who is integral to their attack and go forward, and Adam Reynolds seems to be struggling with form at the moment. However, I can’t see the Rabbitohs turning in another performance like last week. I think they will come into this match very motivated, and Greg Inglis could be in for a big game. I’m tipping the Rabbits.