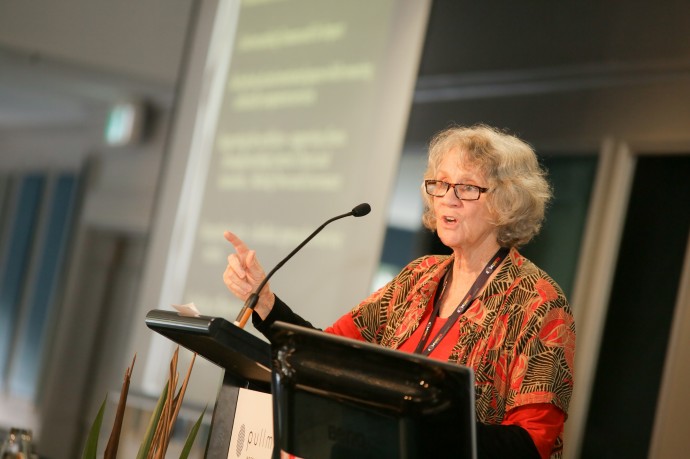 Prof. Judy Atkinson was a keynote speaker at the 2014 SEWB conference in Brisbane. Photo: Nikki Blades

More than 180 social and emotional wellbeing staff from organisations across Australia met in Brisbane this week for a national conference that explored themes from the impacts of trauma on the Stolen Generations, through to family wellbeing and the good results being achieved at the grassroots in communities.

Keynote speaker at the conference was Professor Judy Atkinson who spoke on the effects of trauma on Aboriginal and Torres Strait Islander people, particularly the Stolen Generations and their children and grandchildren.

A Jiman/Bundjalung woman, Emeritus Professor Judy Atkinson is the developer of the We Al-li/Indigenous Therapies Program, and is the author of ‘Trauma Trails – Recreating Songlines: The transgenerational effects of Trauma in Indigenous Australia’.

Professor Atkinson told delegates that it was important for Indigenous people to own their trauma story as a people, to share the stories and to listen to them.

“We live storied lives. We organise experience into stories as we share and live interactively with others. We are born into stories. While we talk of intergenerational trauma, take a moment to know that we have more children being removed than ever before. It is important to understand what has shaped us,” she says.

“This process becomes the basis of all healing practice. It is the power of story. Research shows that stories change us. Change our neurobiology. Stories also live through us.”

Professor Atkinson spoke of complex trauma that has been handed down and affected generations of Aboriginal and Torres Strait Islander people. In some cases four generations in families had been removed.

“Trauma runs down through generations. The massacres are all documented and they are the forgotten wars. There was physical and sexual violence on the frontline. [And from that trauma] what creeps in is alcohol and other drugs to cope with trauma,” she says.

“Our first generations were killed and imprisoned, and females sexually misused. Our second generations turned to alcohol or drugs as their cultural and spiritual identity was damaged; in our third generations we had spousal assault and societal trauma. In our fourth generations the abuse moves from spousal abuse to child abuse or both. In the fifth generations, the cycle repeats as trauma begats violence, begats trauma.

Professor Atkinson went onto say that in correctional centres across Australia, 90% of Indigenous people have experienced childhood trauma. She urged delegates working in the frontline to look after themselves.

“You will have to carry many painful stories.”

The conference was held over two and a half days and delegates also shared good practice projects and initiatives they were running in communities, including many healing programs.

The conference concluded with reflections and identifying the learnings delegates would take back to the workplace.