At the start of Term 1 at Barunga School in the Northern Territory, the Remote School Attendance Strategy was implemented to raise school attendance by employing members of the community to supervise attendance and lend a hand in getting kids to school. Although it’s proving successful, increasing the school’s involvement in community events, like the Barunga Festival, has also sparked a keen interest in students. 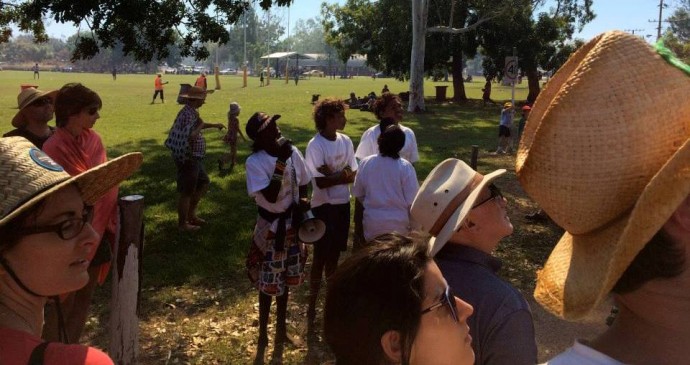 Made up of high school students from Barunga School, the ‘Jawoyn Junior Guides’ have been giving tourists a taste of their culture and lifestyle. Photo: Facebook.

The Barunga Festival is one of the largest, longest running, and most important community festivals in the country. It sees thousands of tourists come from across the country to indulge in the best of Aboriginal culture, crafts, music, and sport.

Teaching principal of Barunga School, Adrian Trost, saw an untapped resource in the festival and decided the 84 students, ranging from the early school years through to high school, should become involved in the festivities.

“This year has been probably one of the biggest years where we’ve understood the opportunity we have because of the Barunga Festival. We saw it as a chance to shape learning around the event and, so far, the response we’ve had from people who’ve experienced some of the activities we’ve put in place, has been incredibly positive,” says Adrian.

“It is a unique opportunity and it’s something we’ve developed and continue to see potential for development. At the beginning of the year we thought ‘What would you like to do?’, ‘What special skills, what ideas do you have?’ and we came up with three brilliant ideas.” 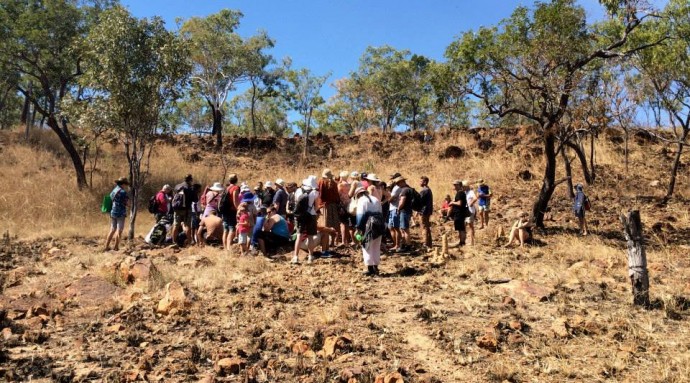 The profits made are reinvested in the schools as well as given to the students as encouragement. Photo: Facebook.

Students in the early years printed and sold tote bags, whilst the primary aged kids sold paintings, as well as conducting painting demonstrations, and the high school kids led community tours for the visitors, calling themselves the ‘Jawoyn Junior Guides’.

“Overall, we raised about four and a half thousand dollars over two days of the festival. Their involvement was quite amazing and at the end of it we were pretty blown away with the extent of the operations and how far they went and the people that they reached,” he says.

Whilst Adrian says that there is no denying that this is a motivating factor in getting kids to come to school, it’s hard to cater to adolescents because bush schools aren’t fundamentally developed for teenagers. But the closest high school is 100km away in Katherine, so they’re trying.

“High school students need a high school environment and bush schools just can’t supply that, so we have to get very creative about what we offer them and this is by far the best thing I’ve ever seen because those kids who are involved are extremely motivated, and they’re getting some financial gain from it as well,” he says. 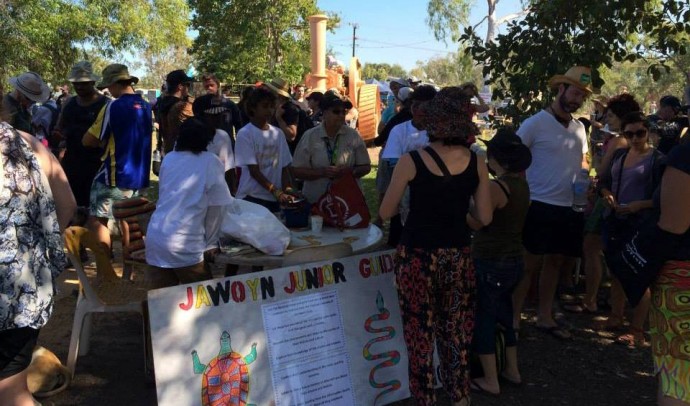 Conducting the guides has given the students a sense of responsibility as well as an incentive to attend school. Photo: Facebook.

Because the kids are exposed to a constant oscillation of traditional culture and western culture, they’re very knowledgeable according to Adrian.

“Children in the Barunga community can enter the mainstream and access it quite frequently. So what we notice is the biggest difference, is the amount of spoken English that the students have in this school,” he says.

“I think in their mindset they’re slightly more mainstream which is not a bad thing, it’s a good thing. It means they’re worldly and they have more awareness of the scope of life in the Northern Territory.”

Adrian knows that there is no single solution to poor attendance rates, but what the school is doing now is definitely on the trajectory to success.

“The more people that come into the school and participate in what we do, the greater the culture we build and the greater the attendance is, because if schools act alone and independently in the community, especially the Indigenous community, then there’s no real connection and people don’t see it as a place that has a great amount of meaning or value. So it’s something that you have to foster and something you have to work on continuously,” he says.