Earlier in the year, Move It Mob Style was named as one of five contenders for the Most Outstanding Children’s Program at the 56th annual TV Week Logie Awards.

Although the award was taken out by ABC’s Nowhere Boys, Managing Director of Vibe Australia and Executive Producer of Move It Mob Style Gavin Jones says that the nomination was a testament to the hard work and dedication of the team.

“To be a finalist at the Logies is a huge honour – it meant that we are up there and considered one of the best children’s programs in the country,” he says.

“From a community perspective the nomination says that our music and our dance is being respected and embraced by the nation. And we are achieving cultural understanding.”

Other nominees of the prestigious award included Dance Academy (ABC3), Nowhere Boys (ABC3), Play Along With Sam (Nick Jr) and Play School (ABC4Kids). The nomination was the first ever for NITV.

CEO of Vibe Australia Georgia Cordukes, members of the Move It Mob Style team, executive producers and hosts of the series Naomi Wenitong and Brothablack were among those who attended the ceremony. Gavin says it was an unforgettable night for everyone. 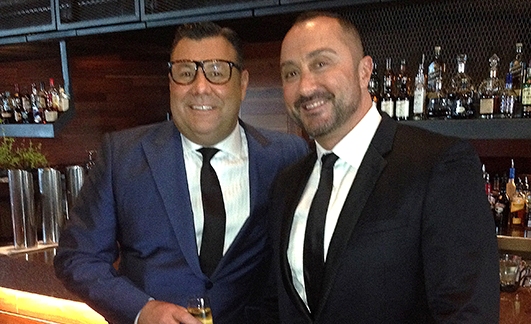 Gavin Jones and his partner Anthony Pavlakis at the 56th annual Logie Awards.

“The Logies is a huge national event with a lot of glitz and glamour. But it is also a very community oriented event – the TV community, and there is a sense of family in the room as well. It is a huge event starting around 4pm and going through until midnight, and then the after party,” Gavin says.

With all the amazing shows, presenters, and actors nominated at this year’s Logies, it was one of our very own that ended up taking out one of the night’s most prestigious awards – the TV Week Silver Logie for Most Outstanding Drama Series.

“Redfern Now is an amazing show bursting with Aboriginal talent and it’s so great to see all-Aboriginal shows like it becoming more and more recognised in mainstream media – it really reflects the talent our people have,” says Gavin.

“Everyone at Deadly Vibe would like to congratulate the ABC1 and the cast and crew of Redfern Now for this amazing achievement”.

Produced by Vibe Australia with support from the Australian Government through the Department of Health, Move It Mob Style first hit television screens in March 2012 as a dance-based series, targeting Indigenous youth.

Now, the team is excited to have a fourth series in production, which is expected to hit television screens around the country towards the end of the year.

“Move It Mob Style Season 4 is almost finished – very exciting – and every year it gets better and better. I think it is due to hit the NITV screens in August. Keep your eyes out – it’s going to be deadly!” Gavin says.