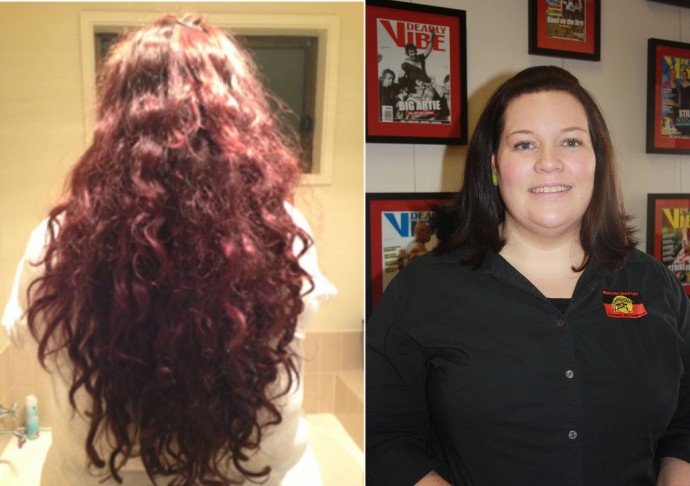 Before and after: Shavaun’s locks will be made into wigs for children with alopecia

Alopecia is an autoimmune disease that affects hair growth on the scalp and entire body which results in minor or complete hair loss, with slim chances of regrowth.

In honour of Alopecia Awareness Week, Goulburn woman and employee of Winnunga Nimmityjah Aboriginal Health Service, Shavaun Chapman, has decided to selflessly give up her waist length locks to the Variety Children’s Charity.

Children who suffer from this condition are subject to the detrimental psychological effects that losing hair can have on self-esteem and confidence.

Shavaun’s hair will now be made into wigs for these children as part of the Princess Charlotte Alopecia Program.

“There’s so many people who go to the hairdressers and cut their hair off and it’s just swept away, when it takes 15 to 20 lots of people’s hair to make one wig,” Shavaun says.

“Even if half of those people did it, it still makes a massive increase for someone because they have to pay $3,500 for the wig as well. So getting the hair is the first step.”

After two years of debating with herself on whether or not she should cut off her hair, Shavaun did some research on what she could do with it if she did. When she came across the Princess Charlotte Alopecia Program the decision was easy.

“I wanted it to go somewhere and I knew there were a lot of initiatives out there for other hair companies, but I thought this was a little bit glamorised,” she says.

“I’d heard of Variety before, but I didn’t realise they had the charity so I googled what kinds of charitable organisations were out there that do things with hair.”

Feeling good about herself, Shavaun is on a mission to encourage her workmates and other Aboriginal and Torres Strait Islander people to follow her lead.

“We have thousands of clients and so many staff there with such long, thick, beautiful hair who aren’t aware of the program,” she says.

“Once I had cut my hair off, everyone at work noticed, and when I told them about the program they said, ‘oh my god that’s great’ or ‘my daughter wants to cut her hair off’.

“There’s so much focus which is awesome on healthy lifestyles and giving up smoking and they’re amazing initiatives, but I think there’s so much more that people can do that doesn’t cost money or involve funding.”