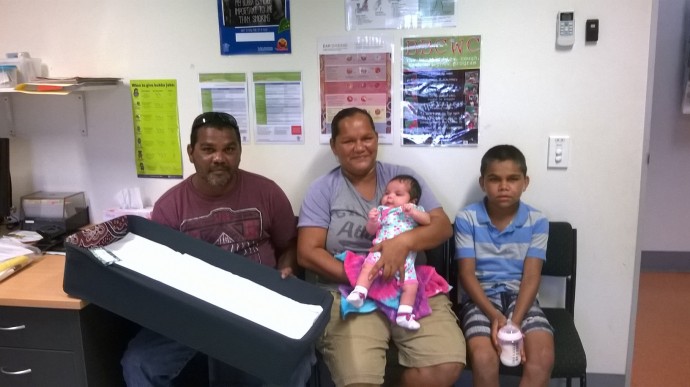 The nurses of Apunipima in Far North Queensland have done it again – this time with their Pepi-pod program which has won a major award.

The team was announced as the winners of the Team Innovation category at the HESTA Australia Nursing Awards at a gala ceremony in Sydney last Thursday night.

The recognition was for their innovative work in rolling out the safe sleeping devices for Aboriginal and Torres Strait Islander babies on Cape York which aims to reduce the above average rates of Sudden Unexpected Death in Infancy (SUDI).

“The Pepi-Pod Program is an Australian first and the team is thrilled to be doing something innovative and empowering to reduce infant death on Cape York,” Apunipima Maternal and Child Heath Team Leader Johanna Neville says.

“One of the many positives of this program is that Indigenous Health Workers are leading the roll out. This enhances community relationships and creates a safe space for the exchange of knowledge and support.”

The pods are part of a two-year study led by chair of the SIDS and Kids National Scientific Advisory Group, Professor Jeanine Young from the University of the Sunshine Coast, to assess the acceptability and feasibility of using them in communities.

The Pepi-pod originated in New Zealand to reduce the risk of SUDI in infants. The pods are safe sleeping spaces that can be placed within parents beds.

“Murri people and Aboriginal people certainly like to sleep with their babies so they were hoping that if they created a small space that goes within the adult’s bed, it might make an adult’s bed the safest place for a baby to sleep,” Johanna explains.

“They found that it was helpful and that SIDS rates in the Murri population in New Zealand decreased and then it got introduced into Australia through the Sunshine Coast University.”

Apunipima sought out the University and obtained some of the pods, decorated with Indigenous designs. They are now being handed out to parents along with their baby baskets.

“They were part of that baby basket – it was all the things that you need to raise that baby – and we were also providing a small sleeping space which was a sleeping bag,” Johanna says.

“It was a good bed, but it wasn’t as good as this Pepi-pod and we wanted to be able give parents the bed because parents are already able to identify that they liked to have a little bed that they were able to put in their own so they were able to sleep with their infants.”