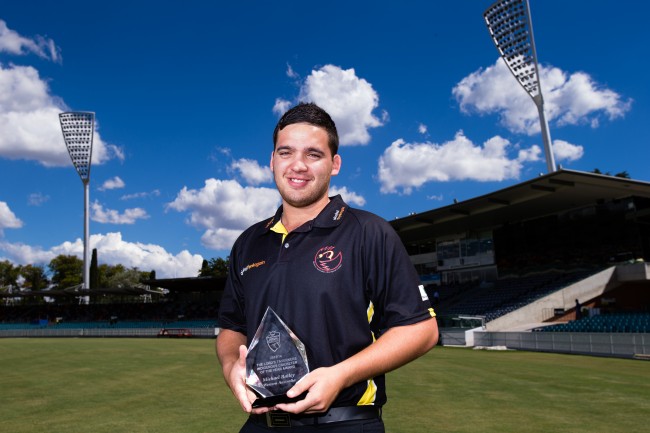 Western Australia all-rounder Michael Bailey has been named the Lord’s Taverners Indigenous Cricketer of the Year for 2013-14 at the State Cricket Awards in Canberra earlier this week.

The National Chairman of the Lord’s Taverners Australia, Greg Brown, presented the award to Bailey at the ceremony to recognise Australia’s best domestic cricketers for the 2013-14 season. The awards are held each year in the lead-up to the Bupa Sheffield Shield final.

Bailey has enjoyed an impressive season on and off the field. Last month he captained WA to the 2014 Imparja Cup title, dominating the tournament with the ball with 16 wickets in eight matches at an average of 4.0 including an impressive 5-0 from 3.2 overs against the Northern Territory.

He has also excelled in grade cricket this season, with his stellar performances for Gosnells District Cricket Club (552 runs at an average 46.0 and highest score of 142) earning him a spot in the Western Warriors Development Squad where he trained alongside WA’s senior players and had the opportunity to work with former Test cricketer and WA batting coach Geoff Marsh.

Today’s award also recognises Bailey’s outstanding contribution off the field, particularly his role as a mentor with the Clontarf Foundation, a charitable organisation which uses sport as a vehicle to help improve the physical and social well-being of indigenous youth.

Upon receiving the award, Bailey said:

“I’m honoured to receive this award which recognises not just on-field performance but also contributions off-field for Indigenous cricket.”

“I’m proud to be involved in such an exciting time for Indigenous cricket. I saw a lot of talent at the Imparja Cup and I know it will continue to grow and improve.”

“The Imparja Cup, the National Indigenous Development Squad and awards such as this are important to this growth and seeing Indigenous Australians in a Baggy Green.”