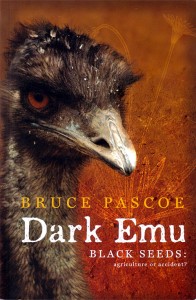 The latest foray into Australian Indigenous history by national award-winning Aboriginal writer Bruce Pascoe is set to re-ignite the long running debate about the true nature of Aboriginal civilisation at the time of European colonisation.

Bruce’s book Dark Emu – Black Seeds: agriculture or accident?, which hits the shelves in March, is a significant new contribution to the academic and social discourse about the true history of pre-European Australia and its Indigenous inhabitants.

Dark Emu argues for a reconsideration of the hunter-gatherer tag for pre-colonial Aboriginal Australians and attempts to rebut the entrenched, centuries-old notion that pre-European Aboriginal people were hunter-gatherers who did not farm the land they occupied.

“The evidence insists that Aboriginal people right across the continent were using domesticated plants, sowing, harvesting, irrigating and storing – behaviours inconsistent with the hunter-gatherer tag,” he says.

The premise is supported by Australian historians Rupert Gerritsen and Bill Gammage in their latest works, but Dark Emu takes it further and challenges the hunter-gatherer tag as a convenient lie promulgated by colonisers who ignored the possibility of prior Indigenous possession of the land.

Almost all the evidence comes from original records and diaries of Australian explorers – sources academic historians consider impeccable – and presents new material not covered by others.

“My book is about food production, housing construction and clothing,” Bruce says.

“Gammage opened the debate by revealing that colonists said that Australia looked like an English park. Dark Emu analyses the reasons why the hunter-gatherer label was still applied to Aboriginal people despite the colonial texts showing an entirely different economy.

“Aborigines did sow, grow, irrigate, preserve and build. Hunter-gatherers do not do that. Time to look again.”

Bruce is an acclaimed writer, having won the Prime Ministers Literary Award for YA Fiction, 2013, for Fox a Dox.

He is a Bunurong man born in the Melbourne suburb of Richmond. He is a member of the Wathaurong Aboriginal Co-operative of southern Victoria and has been the director of the Australian Studies Project for the Commonwealth Schools Commission. Bruce has had a varied career as a teacher, farmer, fisherman, barman, fencing contractor, lecturer, Aboriginal language researcher, archaeological site worker and editor.