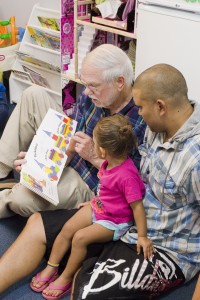 Professor Sparling visited the 3A Learning Centres to see the program being put into practice first hand. He was particularly impressed with how Gumala has taken the lead in Western Australia.

“Gumala is currently the only group using the program in Western Australia and has made very good progress. I visited two centres today and was happy to see parents who are engaged with their children and heard the primary school is noticing a difference in the children who have attended 3A opposed to the children who haven’t, so the early signs are very promising,” Professor Sparling says.

“Gumala’s model is a playgroup model with a link to traditional schools. This strategy is a very successful one that is starting to get the attention of the Government and other organisations. There is clear evidence that the 3A students are much more likely to go to university, more likely to succeed and even parents feel benefits, particularly single mothers, who see their child advance and want to do better too,” he said.

“Some unexpected benefits that we have found in the past 30 years include health benefits such as lower rates of high cholesterol, hypertension and obesity compared to children who have not been exposed to the program.”

Gumala’s General Manager of Education Lynne Beckingham said the program was created in response to the significant unmet need in the provision of early childhood education amongst Indigenous communities in Australia. The Abecedarian Approach was selected due to the comprehensive evidence base documenting the program’s effectiveness.

“GAC identified communities in the Pilbara had no access to early childhood programs and there were no resources for children (aged from 0 to 5 years) and their parents to help them socialise or develop positive life trajectories and learning behaviours. We wanted to remedy this by establishing a partnership with University of Melbourne to implement the Abecedarian approach pioneered by Professor Sparling,” Lynne says.

“We are hoping to collaborate with a range of parties to ensure all children have access to this program,” she says.

Principal of Paraburdoo Primary School Troy Withers said the 3A program will greatly increase the school readiness of our future students.

“3A creates a positive relationship with the Aboriginal community, all of the young families in town and the school. It will break down perceived barriers that can encourage students to engage in and attend school,” Mr Withers says.

“I hope that it will grow from its early beginnings into being a successful program that supports the town, kids and families. Hopefully these families will become a part of the Paraburdoo Primary School community and they will be school ready by the time they are able to start their formal education.”

Gumala began a partnership in 2011 with the University of Melbourne’s Graduate School of Education, with Professor Collette Taylor, to develop a custom made program that addresses the unique needs of parents and children in remote areas to access quality early childhood programs and improve the region’s education outcomes.

In 2012 WA Education Minister Peter Collier signed a partnership agreement with Gumala to work with local primary schools in the Pilbara to facilitate this strategy. Today the program boasts three 3A Centres, operated in collaboration with local schools by Gumala, with another two opening in the Pilbara soon.