With the end of 1996 came the long awaited fourth album by Yothu Yindi. Birrkuta (Wild Honey) has re-focussed attention on one of Australia’s best known bands. 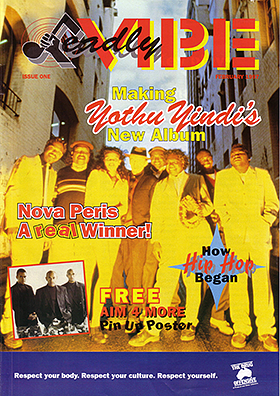 Since the release of Birrkuta (Wild Honey), Yothu Yindi has been keeping busy on the promotional circuit. And they have also been on a well-publicised trip to South Africa.

“Yes, we were in South Africa for eight days. The main reason for going was to promote the Fred Hollows Foundation and their glaucoma programs. (Glaucoma is an eye disease that can lead to blindness).  We were able to meet the people from the programs that Fred set up in central Africa and we were also able to gain exposure for Yothu Yindi – we gained really positive response.”

Normally, bands can only afford to spend limited time in recording studios. But having their own equipment meant that Yothu Yindi were able to spend as much time as they required to make music, giving them more creative freedom.  In addition, they had the freedom to travel around, recording traditional musicians in their own communities.

“The band had more control in the creativity because we were able to control our time and space the way we wanted to control it, so we weren’t pushed into doing things we didn’t want to do. We did things at our own pace.”

As well as the local content, there was also some international exchange.

“Two of the tracks were co-written and co-produced with Andrew Ferris from INXS. We did some of it in Australia and some of it was done in England. Every time we did something we were able to courier it to Andrew in England and he was able to make it into track form.”

“Writing is like a hobby for me, it’s part of what I do. When I’m teaching, I’m writing all the time, I’m reflecting on things , making sure I’m not going to make the same mistake next time so writing to me comes automatically. It’s just expressing yourself.”

Plans for 1997 include national and international tours. Looking even further ahead, Dr Yunupingu is thinking about who will be leading Yothu Yindi when he eventually steps down.

“Our organisation is a cottage industry, so basically we want to have control in that area but always have the view of maintaining who’s going to be in line next.  So it’s very important for our younger generation to understand this type of survival and existence and I think it creates that type of awareness.”

As for his own personal projects, Dr Yunupingu is planning to move away from primary school teaching into a new, exciting project.

“I’m putting most of my energy and time into creating this establishment called Yothu Yindi cultural foundation, which will allow four young Aboriginal people to come in and start education from music. Then it will be extended to different experiences.”