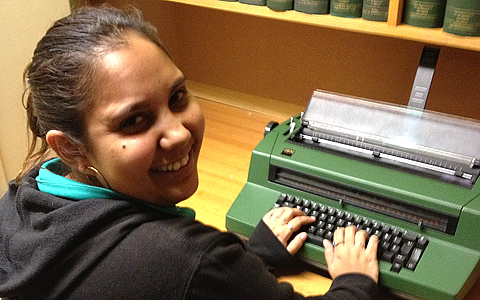 Staying healthy and strong is very important, not only physically, but mentally too. Smoking is one addiction that takes a toll on both of these things.

Darwin woman Sekur Clayton is blogging her experiences to the world through the No Smokes website to encourage others not to take up the habit or to quit.

“When I said I would write about it, I was unsure about exactly what to say. Especially because I haven’t quit smoking and I didn’t want to look stupid writing a blog about No Smokes and still smoking,” she says.

“I guess I just wanted people to hear my story on why I picked up smoking; I think my story is very similar to others that have picked up the habit.”

Sekur began smoking at 14 years old to try and fit in with the ‘cool’ crowd at her school and always told herself that she didn’t need a cigarette, she just wanted one. It wasn’t until she tried to quit two years ago that she realised that it was the other way around.

“Because I was at the legal age to buy smokes and smoke in front of my family, I wasn’t getting an adrenaline rush of sneaking in a cigarette at the back of my house or down the road,” she says.

“That’s when I decided I would quit, but it was a lot easier said than done.”

She’s actively tried to quit for two years now and has tried all sorts of nicotine replacement therapy including patches, tablets, gum and electronic cigarettes.

“I tried Champix which is prescription medication that is used to treat nicotine addiction,” she says.

“When I tried this I was doing well, I didn’t want a cigarette, and every time I thought about having one I would feel sick. I lasted three weeks without one. I felt good! Unfortunately old habits die hard.”

Sekur is a successful young woman, recently purchasing her own apartment, but she is beginning to see the financial strain in her habit. But she says it’s harder than she expected.

“I know what damages smoking causes  and I do want to kick the habit, but I feel like I’m not ready and I know that if I keep trying to quit when I’m not ready, it’s just not going to work,” she says.”

“I think we all know why smokers should quit (health, budget), but again, I feel that you have to be in the right mind frame to do so. Just don’t give up, giving up!”