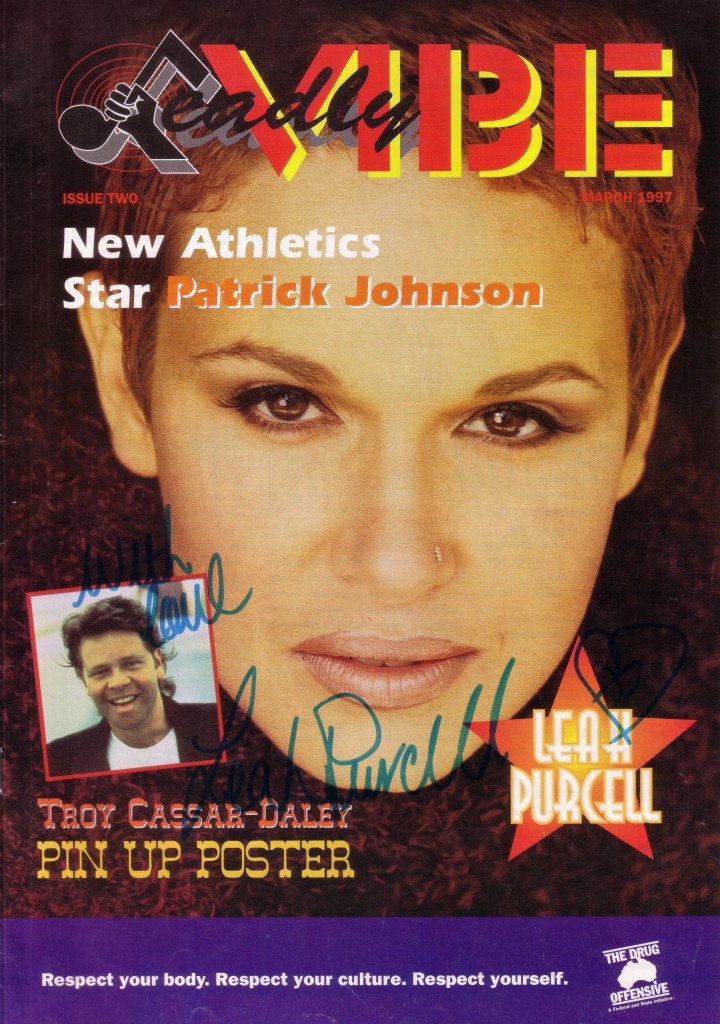 Leah on the cover of Deadly Vibe Magazine in March 1997

Most readers will know Leah Purcell for her work on stage and television. Of course, she was in Bran Nu Dae and she’s currently co-starring in the ace new series on ABC, Fallen Angels. But some of you may not know that Leah is also a deadly singer and musician.

Deadly Vibe recently spoke to Leah about her music

DV: So it is different, doing the acting and the music?

Leah: When I do my music I’m someone else from when I’m acting. Music is a lot more personal than acting. For example, when you’re performing a live gig and someone comes up and cries, that’s the biggest rush. When they say they loved it and connected with it.

Music can act as a real healing process. You go to a gig and see all the different races of people that come there. And yet there’s not one comment about it. They’re there to listen to the performer, they all have that in common.

DV: You mentioned about people crying at your gigs – there’s one song in particular that sets them off, isn’t there?

Leah: Yeah, Run Daisy Run. It’s about my grandmother. She was taken away when she was three years old, from her homeland – Mitchell in Central Western Queensland. And she never saw her mother or the rest of her family again. By the time I came along she was crippled with arthritis and Parkinson’s Disease. Even though she didn’t hardly talk, we were very close and spiritual and we really could communicate.

And one day I was just thinking about some of the stories she told us and I wrote that song, Run Daisy Run, in five minutes. I don’t even remember writing it. When I stopped, I was like, wow did I do this?

At that stage I was still experimenting, just singing in the shower. I sang it to my boyfriend and then I sang it to a group of people. I used to always sing with my eyes shut and when I finished everyone was so quiet. I thought they hated it and I opened my eyes and they were all having a cry.

DV: What about your song Manscent? What’s that about?

Leah: That was to do with my boyfriend who ran a gym in Queensland for kickboxers. I was in there one day working out and I was thinking to myself, I’m the luckiest girl in the world. All these guys, all these muscles and sweat, all around me. So I went home and wrote a song about it. My boyfriend didn’t really mind; he said I could look but don’t touch.

DV: What instruments do you play?

Leah: I started on guitar, so I could have something to write down the melodies to my music and give it a bit of rhythm. I had no plans of ever playing it on stage. But then one of the guys in the band told me to be strong and do it girl.

I still get a bit nervous, especially at pub gigs. I know there’s a lot of musos in the audience and I’m always thinking they’ll notice the mistakes. But then they don’t know the music, so they probably don’t notice. I’ve noticed that the more I get up and have a good time, the better it goes.

I still think of myself as a beginner. I’m getting more confidence to sing and play guitar with the rest of the guys in the band. I’ve also got a bass guitar and a keyboard. I’d like a sax. And I’d like to have the time to play all of them.

DV: Up until now, we’ve only been able to hear you play live and the music’s not been available on release. So when are we going to be able to buy some of your music?

Leah: I’ve been talking about some possible publishing deals with a mainstream company and working on new material with a few other people. It’s looking promising and I should know more within a month or so.

If it comes off, I’ll be recording some songs and doing some writing workshops with someone who’s already released some CDs. I can’t tell you any more about it just yet. But you’ll be the first to know.

DV: Got any tips for up and coming musicians?

Leah: Always try to get to know as many musos as you possibly can. For Koori Kids, there’s always someone around that’s got a jam going. Don’t be ashamed, don’t keep it to yourself in the shower. Make sure you’re out there and get in with the right people. Build up a repertoire of your own songs. If you’re going to do a cover put something of yourself into it.