Talented LA musician and producer, Stevie Salas recently flew in from the US to help East Journey shape what will be their first single “Bright Lights” from their highly anticipated sophomore album. 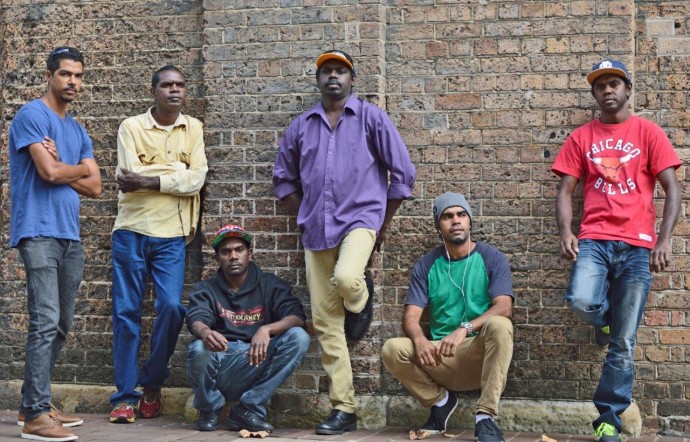 The East Journey boys are excited to be growing and developing as artists. They are looking forward to releasing a new album that reflects their more defined and mature sound.

Arian Pearson, the band’s acoustic guitarist, says the first single is a “platform song”, a bridge between their first and second albums. “We’ve created one album and now we are stepping it up a notch,” Arian says. “We are going up a level to where we know we can be more creative and find that real X-factor. We are really developing ourselves as musicians and developing the sound of East Journey.”

The new single is being produced by American guitarist extraordinaire and television, film and record producer/composer Stevie Salas.

“I was asked to come down to Australia to work with East Journey, so I checked them out and I thought, ‘Man, these guys are so cool, I think I could offer something to this’,” Stevie says.

With a wealth of experience working with artists such as Mick Jagger, Rod Stewart and Steven Tyler among others, Stevie had a lot of knowledge to pass on.

“Stevie has taught us about productivity,” says Arian. “He has a lot of knowledge to share with others and pass on – about the music industry, how you can be successful and different ways of doing things in music. Every artist has a different way of doing things, a different sound I guess, but if you bring different artists together, that is when the magic happens.

“He’s shaped our single a lot. You go with his instincts, because he’s a great musician but also a great person. We are just really happy to be here working with him and that he flew all the way from America to work with us.”

Stevie has been similarly impressed with the boys.

“I feel like I’m their great ‘Red’ grandfather now,” he says. “They are young talented boys and they have that earth thing that goes on. They vibrate with the planet. And it’s inspiring to me, and I understand it and I can see it and I want to keep them there and I also want to take them somewhere else.

“I want them to be as big as Justin Timberlake or anybody else. They don’t have to sound like Justin, but I’d like to see more Indigenous people be more successful.”

The first single off the album compares the frantic place of some parts of the world to the more remote and relaxed environment East Journey hail from.

“The song is about how the world is racing ahead and everything is moving so fast now it’s hard to keep up with everything,” says Arian.

“A lot of people don’t get time to step back and slow down and realise what’s happening. The environment is changing and also nature. Everything is linked.”

Patrick (PJ) White, lead guitarist for the band says, “Coming from an untouched land, a pretty remote place and coming to the big smoke, experiencing that kind of nature [and it’s urban contrast] that’s how we were inspired to write the song.”

Travelling to busy and foreign places is something the band may never get used to, but it will be a big part of their lives for the foreseeable future.

“The first couple of days [on the road] we like it, but after a week or so, we start feeling homesick,” Patrick says.

“Everything is a great experience though, it’s good for us,” says Arian. “We always know that we are going back to our culture and our land. Having that in the back of our minds makes everything okay.”

As their music careers are taking off, the band feels thankful that they have mentors they can lean on. Former members of Yothu Yindi have been helping the band navigate the music business and all that it entails.

“Our mentors are a great help for us,” Arian says. “We didn’t have them as we were developing, but now we have a great support network; three of the guys from Yothu Yindi are moulding us as a band, encouraging us and supporting us all around – even when we aren’t playing music. We’ll talk about life in general, outside of music, and just concentrate on the ultimate goal.”

And what is their ultimate goal?

“I’d love to see us perform overseas more often, play around Europe,” Arian says. “We are sort of up for anything really, whatever comes our way, we’ll take the opportunity.

“Our music spreads a message, so we are trying to get that message across. It’s about educating people about our culture and where we come from and connecting in that way. Showing people that this culture is still out there and we are still strong. We are Young, Black, Deadly and Proud!”

“There are no limits,” adds Patrick.