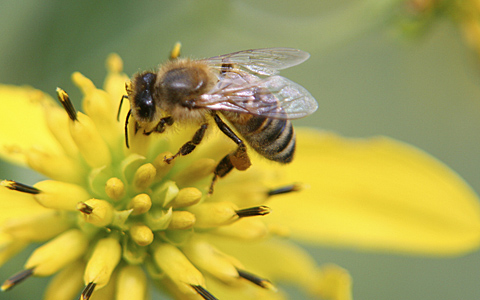 At this time of year many insects like bees and wasps are buzzing around once again and although rare, an allergic reaction to bee or wasp stings can be hazardous and even fatal.

Most people will have a reaction to a sting – pain, swelling, itching, and redness around the sting site and all are common and not cause for concern.

Some will have a severe allergic reaction to a sting – this is known as anaphylactic shock. Symptoms of anaphylactic shock include difficulty breathing, hives, swelling of the face, throat or mouth, rapid pulse and dizziness, just to name a few.

Anaphylaxis is a severe allergic reaction that occurs when the body mistakes a relatively harmless substance to be dangerous and the immune system launches an attack. This reaction is not very common but can lead to shock, cardiac arrest, unconsciousness in 10 minute or less and, if left untreated, it can be fatal.

Severe allergic reactions are treated by the administration of epinephrine, also known as adrenaline. People who know they are severely allergic to certain things like food and stings should carry epinephrine around with them.

If you are unaware that you are allergic to bees or wasps and get stung it is very important to seek medical attention immediately if any of the signs and symptoms of anaphylaxis arise.

Bees sting a person for a number of reasons – because they get too close to the nest and the bee perceives them as a threat, they disturb the bee, or harm the bee whether intentional or unintentional.

When a bee stings a person, they inject venom through their barb shaped stinger. The stinger will continue to pulsate for 2-3 minutes, injecting more and more venom into the victim until it is removed.

The bee will die after stinging someone and it releases a pheromone signalling other bees to attack.

If stung by a bee it is important to remove the stinger properly. Doctors recommend using a hard object like a credit card to scrape it out. Pulling it out with tweezers or fingers can result in part of the stinger breaking off or more venom being squeezed in.

Unlike bees, wasps don’t have barbed stingers and are particularly aggressive. A wasp can sting someone multiple times and are easily provoked.

If stung by a wasp, clean the affected area with soap and warm water, use a cold pack to reduce swelling and use pain relieving medication and cream.

There are a number of ways to avoid being stung by a bee or a wasp – learn to recognise insect nests and avoid them, wear shoes and socks outdoors, avoid wearing perfumes or brightly coloured clothing as they tend to attract them and use insect screens or doors at home.