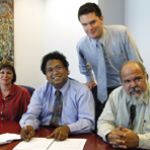 Indigenous education boss Shane Williams knows what it is like to be frustrated by a system that doesn’t take individual differences into account.

He dropped out of his Far North Queensland high school in Year 10, feeling that, among other things, the system didn’t meet his cultural needs and aspirations

He wanted to simply hang out with his mother’s mob at Hope Vale, just north of Cooktown, and enjoy the warmth of this closeknit community.

But it was his family and other important people in his life who convinced the teenager that he should make something of himself, and that he did have the potential to go to university.

Shane took the ball and ran with it. He did a TAFE refresher course, trained as a teacher, and went to work in the primary, secondary and vocational education and training sectors.

He soon found himself working on social justice policy issues and providing educational leadership for the Queensland Government, before taking up a lecturing role at the University of Queensland early last year in the Graduate School of Education.

Along the way, he’d played an important role in implementing policy change on a state level as well as nationally.

It was no wonder that Dr Peter Shergold, the former secretary of the Department of Education, Science and Training, sat up and took notice of Shane and his abilities.

This was an offer too good for Shane to resist. “I never expected it in my wildest dreams,” the modest 42-year-old says.

Although he took up his new post only a few months ago, Shane has wasted no time in focusing on his goals for Indigenous education and training.

He says his vision is to have Indigenous people actively participate in the global knowledge economy. And the way forward, of course, lies in providing the right education and training.

Shane says he wants to be seen as a leader with an optimistic and constructive vision about the futures and needs of Indigenous people ” and he must be doing something right. “I get offers daily from people who want to come and work with me,” he admits.