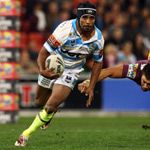 Gold Coast Titans star Preston Campbell has described his appointment as Captain of the Indigenous Dreamtime team set to play New Zealand Maori this weekend as the equal of any of his achievements in the game thus far, including his Dally M Player of the Year Medal and Premiership triumph with Penrith in 2003.

The Indigenous side will face off against the New Zealand Maori in a ‘Welcome to Country’ match as part of the Rugby League World Cup’s opening ceremony on October 26 at the Sydney Football Stadium.

The Dreamtime team, chosen by selectors Arthur Beetson, Larry Corrowa and Ricky Walford boasts an impressive list of current and former NRL players, mixed in with other talent drawn from the Country Rugby League and even Europe. The team is coached by Dally M Coach of the year Neil Henry.

The Dreamtime team enters camp today and will be involved in a number of community events highlighted by an open Fan Day at Redfern Community Centre on Thursday, October 23.