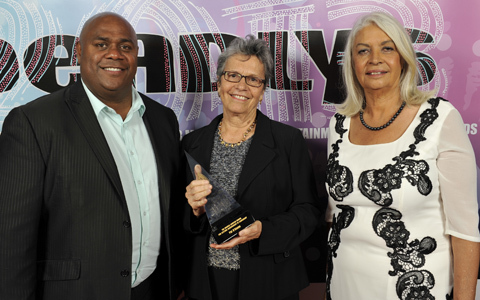 Pat O’Shane received her award in front of a capacity crowd, from one of Australia’s leading scholars, Marcia Langton, and Redfern Tribal Warrior CEO Shane Phillips.

Patricia O’Shane was born in 1941 in the small rural community of Mossman, North Queensland. Her mother moved the family from this small town to near Cairns to give her children a good education. Pat was a high achiever early and ended up the only Aboriginal child in her age group graduating from her high school.

“The Marcia Langton Deadly Award for Leadership is proudly presented to a Kunjandji woman who has devoted herself without fear or favour to championing the rights of her people; and above all else to justice for her people,” the Deadlys audience heard
.
“This is an Aboriginal woman who blazed a path for others to follow. Because many of her achievements have been firsts for her people, she is a genuine and inspiring role model for others.

“High achievement is always partnered by sheer hard work, and Pat O’Shane not only did that, but overcame personal obstacles including the overwhelming grief of losing her beloved mother, to rise above her peers, to become a barrister and later a magistrate.

“The purpose of the Marcia Langton Award for Leadership is to acknowledge and honour our leaders, and it does justice tonight to pay tribute its 2013 recipient.”

Vibe Australia produces the Deadlys® awards, Vibe 3on3®, InVibe, Deadly Vibe®, Deadly Sounds and Deadly TV. The Deadlys® 2013 will air on SBS ONE on Sunday 15 September at 9.30pm and repeated on NITV on Wednesday 18 September at 9.30pm. You can keep up to date with all the Deadlys® news at facebook.com/vibeaustralia and through Twitter @Deadly_Vibe #deadlys. You can also head to www.deadlys.com.au and subscribe to Deadly Vibe Wire at www.vibe.com.au