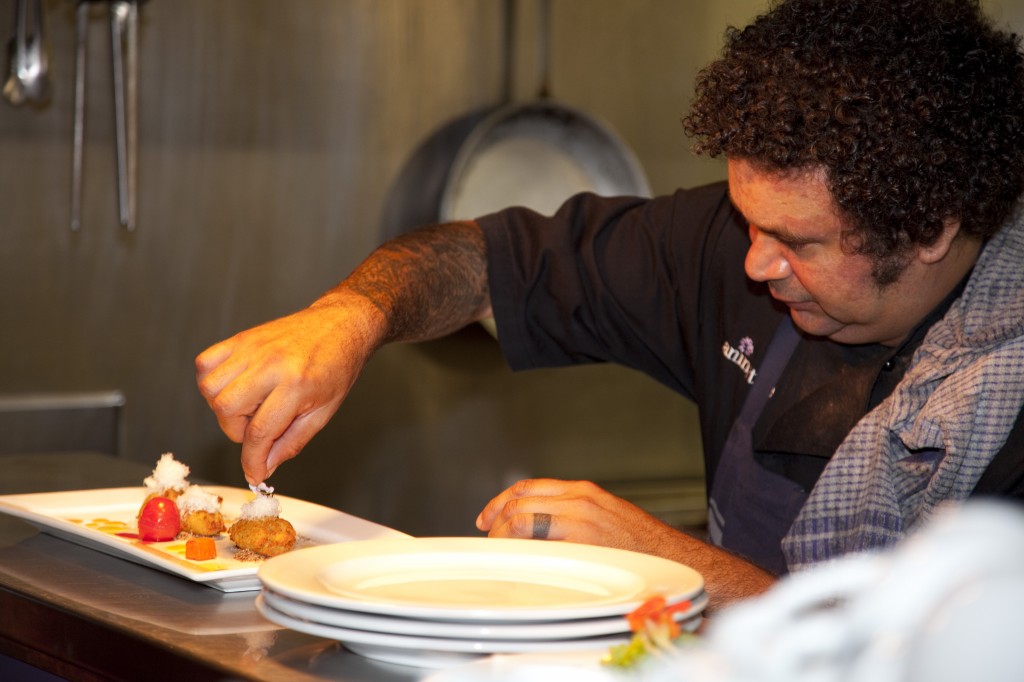 The Jaaning Tree Restaurant in Nambucca Heads, New South Wales, is the creation and gastronomic playground of chef Clayton Donovan. On a visit to the Jaaning Tree, diners are treated to a blend of fresh local produce and Asian flavours with a bush twist.

For the past five years, chef Clayton Donovan has been crafting a complete fine-dining experience that encompasses his passions: his culture, native foods and the water.

The Jaaning Tree restaurant sits on the river at Nambucca Heads, with views out to the ocean and beyond. For the past few years the restaurant has earned a chef’s hat through the Australian Good Food Guide and a steady stream of satisfied customers.

Jaaning (pronounced “jaa-nee”) is Gumbaynggirr for the wattle tree (Acacia irrorata), which has been a source of food for local tribes for centuries.

Chef Clayton Donovan says the restaurant is the culmination of a life-long dream as he learnt about food gathering and cooking at a very young age.

“Aunty Jess Williams and my mum were the first ones to take me out on walks, looking for wild carrots, jaaning and other wild foods. They showed me different varieties and where to get them.”

Clayton started cooking at a young age as his way of helping out around home and his passion grew from there. After moving out of home, Clayton worked at a few small takeaway shops and cafes, then ended up at an establishment in Nambucca. That’s when one of his friends noticed that he had a certain knack in the kitchen and encouraged him to get professional training.

“At the time I couldn’t quite understand what he was suggesting. I was content skating, surfing and playing drums in a band. I didn’t really think much further than that,” Clayton says.

After some initial training in Sydney, Clayton’s first job was working on a glamorous catamaran that sailed on Sydney Harbour and often catered to the stars.

“It was amazing. We catered for big clients, such as Molly Meldrum, The Eurythmics and the LA Lakers. I still think about that time now. I miss being on that boat!”

Clayton then moved on to gain some invaluable experience, working at one of Sydney’s finest restaurants, The Watermark at Balmoral Beach. Next he headed overseas to work in some of England’s finest hotels and restaurants, where again he cooked for high-profile people like Elle Macpherson and Tom Cruise.

The idea for the Jaaning Tree came about after Clayton moved home to Australia with his young family. Clayton’s reasoning for establishing his own restaurant was this: “I’ve got this cultural side that I would like to expose, which isn’t really being exposed in Australia – there are only a few places that are doing it – but if I’m going to do it I want to do it at the top end [of the market].

“I want people to accept it, not just as camp food, but [something that can] be highlighted, like an Asian cuisine or French cuisine, and be placed in a contemporary sense where it can be all funky and fabulous and people can enjoy it and celebrate it.

“It’s sustainable for the country, and it’s part of Australia. It’s what I would want to eat if I’d come from somewhere else. I want to be exposed to and understand these flavours.”