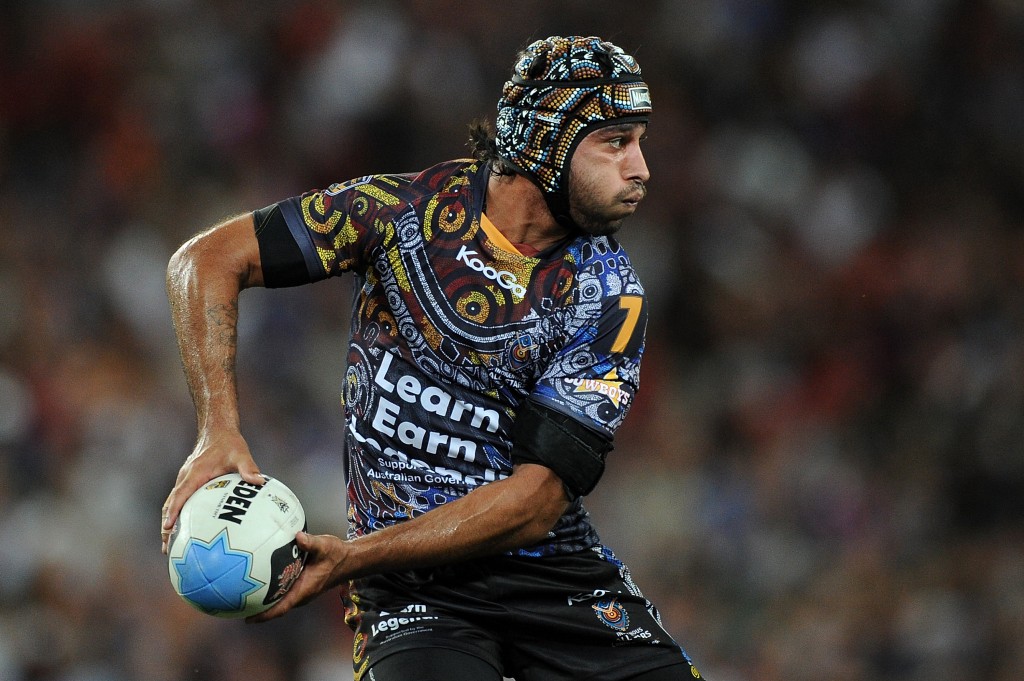 Festival of Indigenous Rugby League for 2014

The NRL has yesterday launched a Festival of Indigenous Rugby League program to take the place of the prestigious pre-season Rugby League All Stars game following every World Cup year.

Indigenous All Stars captain Thurston says the playing group fully supported the week-long festival ahead of a return to the elite All Stars match in 2015.

“The players are 100 per cent behind the All Stars,” says Thurston. “We love everything involved in the week, but we only want to see the match held if it can be done properly and played in the spirit and standard that it has been over the past four years.

“If the All Stars was just another game you could get away with playing it under-prepared…but it is played at such a high level of intensity, almost like an Origin game, that you could not do it justice off the back of a World Cup with such little preparation.

“It means a lot that everyone has listened to how much All Stars means to the players and its credibility has not been compromised by resting the event in 2014.

“I’m looking forward to doing what I can for the Festival of Indigenous Rugby League which should be a huge week in Newcastle. I can’t wait until we’re all back in action in the 2015 game.”

NRL All Stars and Storm skipper Smith says: “We all understand the significance of the All Stars match and the need to preserve its place in the game.

“The challenge is to find a balance between representative football, player welfare, community expectations and the various other commitments.

“We are extremely pleased the players have a voice, along with canvassing the thoughts and opinions of a wide range of influential key stakeholders to form this consensus.

“Personally I agree with resting the game. This will ensure the game maintains its place as an elite representative fixture, which was simply not achievable with approximately 120 NRL players engaged in the World Cup this year.”

All Stars coaches Laurie Daley and Wayne Bennett, ARL Indigenous Council Chair, the Hon. Linda Burney MP, and NRL General Manager of Marketing and Commercial Paul Kind, came together at Rugby League Central yesterday for the announcement of the scheduling change which is seen as a significant step in ensuring the longevity of All Stars as a prestigious event on the NRL calendar.

Importantly, the ARL Indigenous Council has been properly consulted and has formally endorsed the Festival of Indigenous Rugby League for 2014.

“The Council spent an enormous amount of time weighing up the merits of an alternative event for next year knowing that the All Stars, as people know it will return in 2015,” Miss Burney says.

“At its heart All Stars is a stunning example of how Rugby League can be a vehicle for reconciliation. The pride Aboriginal and Torres Strait Islander people have in the All Stars and their passion for Rugby League broadly is palpable.

The 2014 Festival of Indigenous Rugby League event will be staged in a week that will feature a trial match between the Knights and a non-elite Indigenous team, drawn from the immensely popular NSW Koori Rugby League Knockout and Murri Carnivals in Queensland, as well as the NRL Indigenous Player Cultural Camp, Murri v Koori women’s and Under 16s representative games, a Murri v Koori match, a jobs expo and community visits.

Two weeks prior to the festival, the non-elite Indigenous players will be hosted for a week by NRL clubs, providing them the chance to experience an elite NRL playing environment with access to coaching, nutrition and training advice.

Mr Kind says the decision to rest All Stars next year was reached after extensive consultation with a broad set of stakeholders including the ARL Indigenous Council, Preston Campbell, coaches Bennett, Daley, Craig Bellamy and Tim Sheens; players from the NRL All Stars and Indigenous All Stars playing groups; NRL Club CEOs; ARL Commission; RLPA; and Channel Nine.

“Everyone we consulted in making this decision agreed that the credibility of the All Stars concept would be devalued by playing the match without the NRL’s best players,” Kind says.

“It was very clear that the elite players would not be in a position to play in the match following such a long season and the welfare of the players was paramount in the decision we have taken.

“The event we are proposing provides a unique opportunity for non-elite Indigenous players to have an NRL experience, as well as staging all the other elements of the All Stars week which make it such a special event like no other in Australian sport.”

All Stars pioneer Campbell says he fully understood the decision to protect the welfare of the players and the credibility of the event, first held at the Gold Coast in 2010, by changing the structure post World Cup.

“We can’t afford to devalue the All Stars concept and not have the best against the best,” says Campbell. But at the same time everyone also recognises that All Stars is more than just a game, so I am more than confident the alternate event proposed for 2014 engages the community and is a fitting celebration of Indigenous Rugby League.

“I am very comfortable with the decision knowing it will be back in 2015 and that the change will only occur each year following a World Cup, which is in the best interests of everyone involved.”

Inglis says the 2014 Festival of Indigenous Rugby League to be staged in Newcastle, provided a special opportunity for the Indigenous community.

“Significantly, the alternate event in Newcastle means the All Stars concept will continue to recognise the relationship and importance of the Indigenous community to the success of Rugby League.”