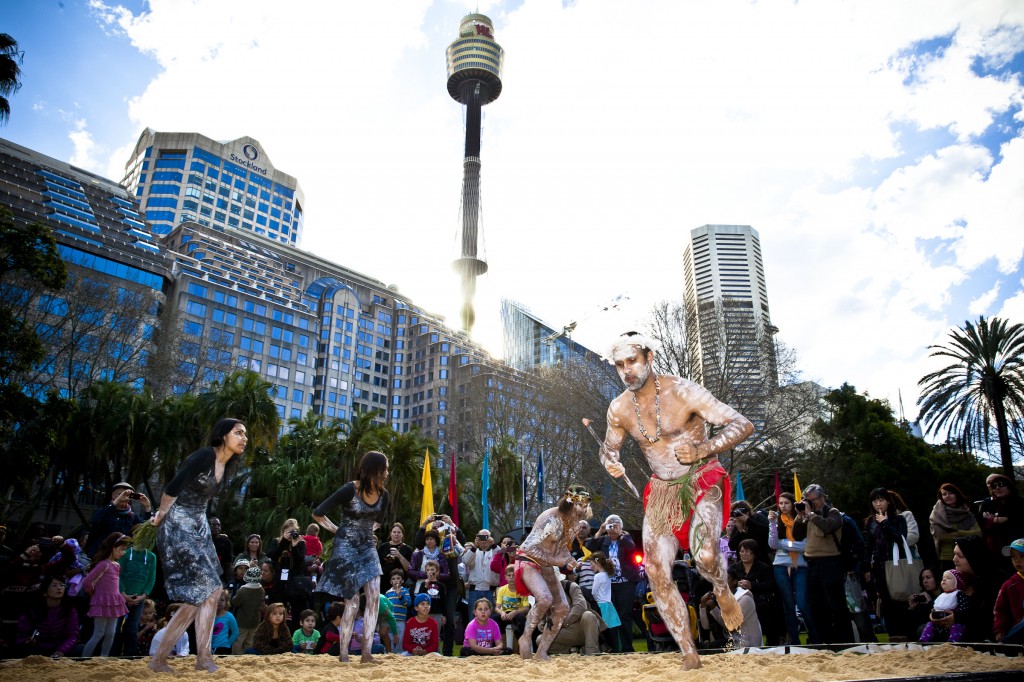 Hundreds of Sydneysiders, visitors and city workers turned out for NAIDOC in the City at Hyde Park North on Monday, to celebrate Aboriginal and Torres Strait Islander culture and history.

Children and adults tucked into crocodile wraps and bush coffee while dancing to rock, pop and hip hop tunes at the fun day out – part of the week-long national NAIDOC festival, running from 7–14 July.

Children enjoyed the dedicated Kidzone, performances by Move it Mob Style, comedy by Kevin Kropinyeri, animals from Taronga Zoo and artefacts from the Australian Museum.

Stallholders included Bush Secrets tea and coffee, Naked Flame wraps (including a crocodile version) and the Vegie Patch food truck, which will be experimenting with traditional Aboriginal and Torres Strait Islander ingredients.

Some lucky people even took part in the City’s first NAIDOC Week bike tour, exploring Sydney’s rich Aboriginal and Torres Strait Islander past on two wheels. The free one-hour tour took bike riders through the Rocks, stopping at Circular Quay where Aboriginal men used to spear fish and first contact was made between Aboriginal and non-Aboriginal people.

Riders also explored public artworks by Aboriginal and Torres Strait Islander artists and passed the site of the first National Aborigines Day, which evolved into NAIDOC week, with the tour ending at NAIDOC in the City.

The City acknowledges the support of the Department of Families, Housing, Community Services and Indigenous Affairs, Gilbert & Tobin and Festival Hire. VIBE Australia organised NAIDOC in the City for the City of Sydney.

The theme for NAIDOC Week 2013 is We Value the Vision: Yirrkala Bark Petitions 1963, which will mark the 50th anniversary of this important turning point in traditional rights and ownership.
The two bark petitions were sent by the Yolngu people, of Yirrkala in northeast Arnhem Land, to the Australian House of Representatives in August 1963, protesting the Commonwealth’s granting of mining rights on land excised from Arnhem Land, and to recognise the land as belonging to the Yolngu people.

The petitions were the first traditional documents to be recognised by Australian law and set into motion a long process of legislative and constitutional reforms.