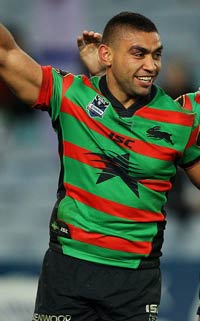 The knack of being in the right place at the right time is a key ingredient that goes into making any great rugby league fullback, and few players today display that uncanny try scoring instinct stronger than South Sydney winger/fullback Nathan Merritt.

As of Round 20, Nathan is the NRL’s leading try-scorer, shooting to the top of the list following a scintillating five-try performance against the Eels in Round 22.

The five-try haul also pushed Nathan into second place on the Rabbitohs all time try-scorers list, and was the first time since 1957 a South Sydney player had scored five tries in a single game.

Filling in for the injured Rhys Wesser, Nathan proved just how lethal he can be when given freedom to roam in the middle of the park, and with every South Sydney break, Merritt was the man backing up and putting himself in position to score.

“It’s a great personal achievement. It’s something I will look back on when I finish my career and soak it in then and enjoy what I’ve done,” said Nathan after the match.

“He’s a natural try-scorer, Nathan, and he kept popping up tonight,” Lang said.

“He got a couple of try assists so it was an unbelievable effort.

“He’s just got that unbelievable knack of turning up at the right place at the right time. It’s a gift and he’s got the athleticism to go with it.”

Nathan has been extremely unlucky not to have played State of Origin football in his career. Selection in the Prime Ministers XIII side in 2006 remains his single call up to the Australian team, and yet there are few more polished and consistent finishers in the game.

Nathan has finished the year as the competitions leading try-scorer once before, in 2006, despite the fact his club finished dead last on the ladder that season, and he is certain to retire as one of South Sydney’s modern greats.