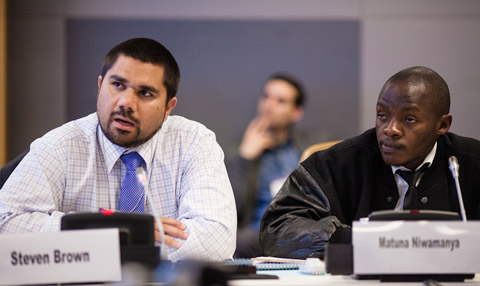 Cultural identity means everything to Bundjalung, Yuin and Wiradjuri man Steven Brown and it’s the key to our young people standing on solid foundations for life. It’s a subject he’s taken to the world stage and one he’ll keep on about because making a difference is what counts.

Steven’s just returned from presenting a paper to the United Nations (UN) International Expert Group Meeting in New York where he was one of seven Indigenous people to address the forum. His paper titled Indigenous Youth: Identity, challenges and hope focuses on the challenges and well as solutions to moving forward with strengthening identity. “The paper was written in consultation with our young people and I also spoke to the Australian Indigenous Peoples Network. I looked at what was missing with our identity, the hopes and the challenges,” he says.  “My idea began to develop that our young people succeed when they have solid foundations of who you are and where you’ve come from, but there are the challenges of being accepted in society in Australia. This is also relevant for other Indigenous people in the world.”

Key themes in his UN paper include the challenges of living in a modern world, which is effectively two worlds: the Indigenous and the non-Indigenous world. A huge impact on forming a solid identity is overcoming the negative stereotypes Australian society pushes onto young people. “I drive a car and own my house and this doesn’t fit the negative stereotypes that Aboriginal and Torres Strait Islanders drink and smoke. That isn’t what we are and I challenge that stereotype in my paper. We can be a range of characteristics from living the more traditional life in remote areas to living in urban areas,” he says.

One of his passions is the power of education and encouraging all young people to believe in themselves – that they can achieve their goals. To this end, he holds himself up as a role model who despite his early upbringing went onto to address the UN – something he never thought he would be doing later in life. “My mum died when I was young. I was born in Mt Druitt in the Western suburbs of Sydney where my older sister raised me. My mum was the first generation of Aboriginal people to complete Year 12,” he says.

The key question for Steven is ‘how do we change society’s stereotypes of Indigenous people’, which he believes contribute to shaping the lives of young people. “Racism and negative stereotypes, how do we change that? I have non-Indigenous friends who are surprised when they find out I don’t drink or smoke. We need to focus more on the positive role models and stories and not the self-fulfilling prophecies,” he says. “I talk about ‘social grafting’ in my paper to the UN where the weight of society’s [negative] expectations and descriptions are shaping our young people’s identity. We need to work out ways we can change those descriptions in the modern world we live in.” Knowing who you are and where you belong is a challenge in Australian societies, particularly with the disconnect from culture and identity that colonisation brought. “With my mum passing away it was harder to find out where I was from – my tribes and totems for example. Even now I’m still finding out the cultural responsibilities that I have to family,” he says. “The hardest part is to figure out where you belong in a modern world because we are a minority, but it’s vitally important to be proud of who you are. The positive experiences come when you find that out and that provides a strong foundation for the future.”

Bi-lingual education is an area that Governments can play a role in which contributes to a sense of culture and identity. “The first thing the colonials did was to try and wipe out our language and now it’s incredibly important that we preserve our languages. We need to look at doing that through schools.” But the world is changing for Indigenous people and Steven cites the National Apology to the Stolen Generations as a key milestone, and figures in the last census where more people were identifying as Aboriginal and Torres Strait Islander. “I remember writing an essay on the Stolen Generations in school and no-one believed me that they existed. But now we have a generation of non-Indigenous people wanting to learn about us,” he says. “And there’s NITV. My non-Indigenous friends watch this – particularly the Move It Mob Style show. Everyone watches it. “Non-Indigenous and Indigenous people are learning about community through the positive things that are happening, and that also means looking out for the non-Indigenous person next door. It doesn’t matter what your background is, community means looking out for everyone.” Steven is currently working for the Department of Education, Employment and Workplace Relations (DEEWR) and living in Canberra.

He spends his spare time with his family in the Yuin nation, at Wreck Bay on NSW’s South Coast. “That’s where I get away from everything,” he says. He is currently studying for his Bachelor of Business part-time and his plans for the future are simple. “I want to live every day as it is and create a better life for someone. That’s enough for me.” Caption: Steven Brown at the United Nations (UN) International Expert Group Meeting in New York.