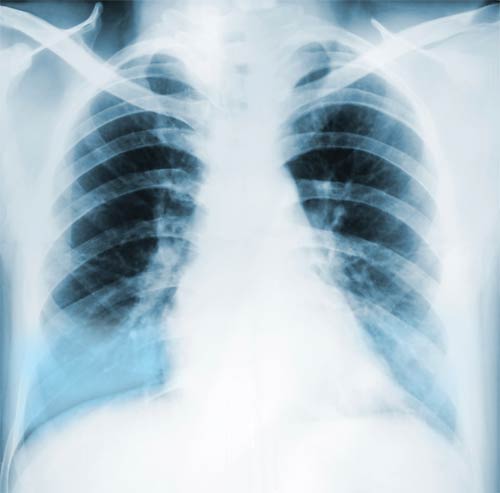 Breathing. We take it for granted but every breath we take keeps us alive. It’s not until we get sick with a cold, asthma or bronchitis that we understand how critical our lungs are to our breathing and survival.

We have two lungs, one each side of our chest, and each lung is made up of sections called lobes. Lungs bring oxygen into our bodies and remove carbon dioxide. Think about how a car works – oxygen is the gas that provides us with energy and carbon dioxide is the waste or ‘exhaust’.

The lungs are designed to protect themselves from irritants via the nose, which acts as a filter when we breathe in. If an irritant does enter the lung, phlegm or mucus acts to protect us by catching the irritant. The offending irritant/mucus is then pushed up toward the mouth by the tiny hairs (called cilia) that line the breathing tubes.

Another way the body protects the lungs is through coughing, which expels the irritant and/or mucus faster than the cilia. That’s why it’s so important to look after your lungs and keep them free of irritants. Some common irritants are smoke, polluted outdoor air, and indoor air, such as smoke from fires, dust and chemicals.

One of the most common long-term irritants to the lungs is tobacco smoke, which we know damages the lungs and leads to lung cancer. A recent campaign by the Cancer Institute of NSW is urging people to “listen out” for the signs and symptoms of lung cancer because survival rates double if the cancer is detected early.

“It’s time to step up and become a strong and healthy Aboriginal community. While your symptoms might not be cancer, yarn to your doctor or Aboriginal Health Worker about any concerns you might have,” she said.

“They are there to walk you through any important information and tests, including an X-ray to examine the health of your lungs.”

Here are the lung-cancer symptoms that Ms Nicholson-Rogers and the Cancer Institute NSW are urging the Aboriginal community to listen out for:

The ‘Listen Out for Lung Cancer’ campaign was launched last month and aims to raise awareness of the symptoms of lung cancer and encourage Aboriginal people with symptoms to visit their GP as soon as possible to improve the chances of it being successfully treated.

According to the Cancer Institute NSW, Aboriginal people across the State are at a higher risk of lung cancer due to the higher prevalence of smoking among the community.

“Our high levels of smoking definitely put the community at a higher risk, but it is important to remember that lung cancer is not just a health concern for people who smoke. Even if you have never smoked, listen for any changes and see your doctor,” said Ms Nicholson-Rogers. “It is important to know the symptoms, and listen out for your friends and family, too,” she said.

It’s important to look after your lungs in any way you can… they’re the only ones you have! Here are some other conditions and diseases of the lungs that you need to be aware of.

•Asthma:
This is where the airways are inflamed and may occasionally spasm, causing wheezing and shortness of breath.

•Chronic bronchitis:
This is characterised by a chronic productive cough.

•Emphysema:
Air is trapped in the lungs in this form of COPD and the sufferer has difficulty blowing air out.

•Acute bronchitis:
A sudden infection of the airways, usually by a virus.

•Cystic fibrosis:
A genetic condition making it difficult to clear mucus from the bronchi (the two main branches of the trachea that go into the lungs). The accumulated mucus results in repeated lung infections.

•Pneumonia:
An infection of the alveoli (tiny air sacs in the lungs), usually by bacteria.

Whatever the symptoms, it pays to look after your lungs and if you are experiencing any symptoms such as difficulty breathing or a persistent cough, get it checked out by your local GP or Aboriginal Medical Service.