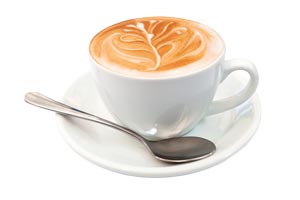 Caffeine is one of the most widely used drugs in the world – but what are the long and short-term effects?

Caffeine is a stimulant found in coffee, tea, chocolate, cola and soft drinks. Global caffeine consumption is estimated at 120,000 tonnes each year. That’s the equivalent of one caffeine-containing drink a day for each of the planet’s 5 billion plus inhabitants.

Most researchers now agree that there is little risk of harm when a person consumes less than 600mg of caffeine a day.

A Harvard University study examined 126,000 people over an 18-year period and found that people who drank one to three cups of coffee a day were up to nine per cent less likely to contract diabetes. In those who drank six or more cups of coffee per day, men slashed their chances of contracting diabetes by 54 per cent, and women by 30 per cent.

Other studies have shown that regular coffee drinkers are 80 per cent less likely to develop Parkinson’s Disease. Also, two cups a day gives you 20 per cent less risk of colon cancer, as well as causing an 80 per cent drop in cirrhosis, and preventing gallstone development by 50 per cent.

According to the National Drug and Alcohol Centre, during times of anxiety or stress or pregnancy, doctors now recommend caffeine consumption of less than 200mg a day.

Fatal overdoses of caffeine are extremely rare, but they are possible. The lethal dose in humans appears to be 5 to 10 grams, although toxic symptoms may appear with lower doses.

Withdrawal symptoms from caffeine can include headache, irritability, an inability to concentrate, drowsiness, insomnia and pain in the stomach, upper body and joints.

These may appear within 12 to 24 hours after the last caffeine intake and peak at about 48 hours after. They usually last from one to five days.

Caffeine can aggravate certain heart problems. It may also interact with some medications or supplements. If you are stressed or anxious, caffeine can make these feelings worse.

A range of energy drinks recently introduced into the market contain caffeine, but in general the concentration of caffeine per millilitre in soft drinks or energy drinks is considerably lower than in coffee. Likewise, there is usually more caffeine in coffee than in tea.

In small children toxic effects may be observed with much smaller doses (for example, drinking about seven cups of strong coffee).

Consuming as little as 100mg of caffeine a day can lead a person to become “dependent” on caffeine. This means that someone may develop withdrawal symptoms if they quit caffeine suddenly.

In the brain, caffeine constricts the cerebral blood vessels. It is also linked to the chemical adenosine. To a nerve cell, caffeine looks like adenosine, however, instead of slowing down because of the adenosine’s effect, the nerve cells speed up. Caffeine also causes the brain’s blood vessels to constrict, because it blocks adenosine’s ability to open them up.

The increased neuron firing in the brain causes the pituitary gland to release hormones that tell the adrenal glands to produce adrenaline (epinephrine). Adrenaline is the “fight or flight” hormone, and it has a number of effects on your body and explains why, after consuming a big cup of coffee, your hands get cold, your muscles tense up, you feel excited and you can feel your heart beat increasing. Caffeine is also linked to increasing levels of dopamine, which makes you feel good.

The problem with caffeine is that once the adrenaline wears off, you face fatigue and depression. So what are you going to do? You consume more caffeine to get the adrenaline going again. This and the avoidance of other withdrawal symptoms can lead to caffeine dependence or addiction.