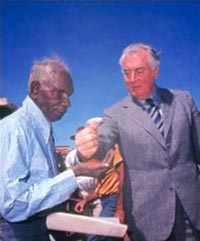 Today marks the 45th anniversary of the Wave Hill walk-off – the event that helped to kick start the land rights movement and elevate the issues faced by Indigenous Australians in the national consciousness.

The Wave Hill walk off is considered an iconic landmark in the history of Indigenous rights in Australia. In 1966 Aboriginal stockmen and their families, mainly Gurindji, but also Mudbura, Bilinarra, Ngarinyman and Warlpiri peoples, walked off Wave Hill Station as a protest against work and pay conditions.

Their determination to explain their position and argue for their rights set in train a process that culminated in bipartisan support for the recognition of the rights of Aboriginal people to land, a fair wage and to the right for a brighter future for their children.

For non-Indigenous Australia it was a wake up call – a time to look into the mirror and ask ourselves who we were as a nation.

Less than a year later, the historic 1967 referendum to include all Indigenous Australians in the Census count and enable the Commonwealth Government to make laws for all Australians was passed with an unprecedented 90 per cent support.

The efforts of the Wave Hill stockmen and their families changed the lives of all Australians forever.

“Today is a reminder of the spirit of the people involved in the Wave Hill walk off and their supporters, their determination to build better lives for all Australians and of our capacity as a nation to achieve this together,” Minister for Indigenous Affairs Jenny Macklin says.

“The Australian Government is proud to be supporting the anniversary celebrations of this event through funding of $656,692 from the Aboriginals Benefit Account.”