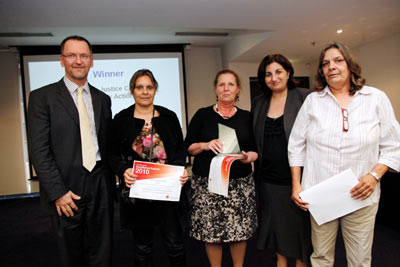 A culturally based juvenile justice program which focuses on the relationship between drugs and alcohol and offending has won the NSW Juvenile Justice’s Aboriginal and Torres Strait Islander (ATSI) recognition award.

“The program acknowledges that offending is linked to drug and alcohol abuse and that there is a role to deliver the program within a cultural context,” Jenny says. “We work with an Elder and provide participants with knowledge about culture, including area specific culture and we look at the impact on individuals, the community, families and culture. One of the most important things we do is to promote awareness and respect for culture.”

The Juvenile Justice’s Community Action Team, based in Surry Hills Sydney, received the top honour in December 2010. Jenny was part of the implementing team that recently completed a program with a group of young offenders, aged between 14 and 16 years at risk of reoffending. The group, from Maroubra in Sydney’s east, achieved 100 per cent attendance and feedback from participants was excellent. In fact, the group want to keep participating in similar activities.

“We have a learning circle with Aboriginal symbols on a map and participants move in and out of that circle. We also use a message stick which is passed around the group. This shows respect for storytelling. The program is also heavily influenced by our Elder,” she says.

All participants had a history of offending and were on the pathway where they offended under the influence of drugs and/or alcohol or stole to finance an addiction. The program tracks behaviour (like footprints) while developing skills over three distinct stages of the program to help participants reduce the risks associated with substance abuse and offending behaviour.

“Part of what we do is to help them see the relationship between substance abuse and offending and the impact it has. When they start to see that impact, particularly on their culture, there’s greater awareness,” Jenny says.

Dthina Yuwali is unique in that it is ATSI focused and uses a cultural context. It was developed by ATSI and non-ATSI staff within NSW Juvenile Justice and piloted in June 2006 with young Indigenous men and women in metropolitan, rural and regional locations. NSW Juvenile Justice staff are trained to deliver the program in custodial and community based settings.

“While developing the program, NSW Juvenile Justice looked at what was best practice internationally. It is now rolled out across the state and we hope to run it again in metropolitan Sydney,” Jenny says.

In 2009, a NSW Parliamentary Budget Estimates Hearing was told that for the period from 1 to 18 September 2009, 43 per cent of young people in custody were Indigenous and 57 per cent non-Indigenous. Considering the proportion of Indigenous people to non-Indigenous in NSW, the statistic tells its own story and underlines the need for more programs like Dthina Yuwali.

“To get 100 per cent attending and wonderful involvement from participants, contributing their own knowledge and learning about their culture is a good outcome. They enjoyed the program and want to do more of it,” Jenny says.