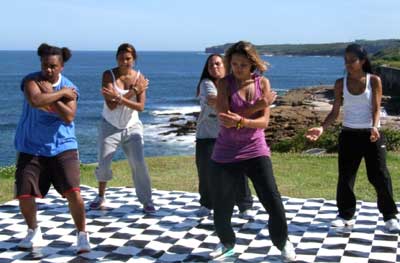 Move it Mob Style is the name of a new dance based television show being produced by Deadly TV that aims to not only get you moving, but also to get you healthy. The new show, which just began production and will be visiting Indigenous communities from February, takes a different approach than most health and fitness programs, incorporating hip hop dance routines with the latest Aboriginal and Torres Strait Islander hip hop beats, while also delivering strong health messages and segments dedicated to healthy living.

With the show travelling to Indigenous communities all around the country, each episode will be set in a completely new locale, with different hosts, dancers and routines offering something new to learn each time.

Much more than just dance routines though, the 30 minute program will be divided into different segments that range from listening to a local band or musician, learning a traditional Aboriginal dance or new break dancing move, or taking a closer look at important health issues in the area. A total of four dance routines will be featured in each episode, with many of the other segments about healthy living and eating being presented by local elders and role models.

With four Aboriginal and Torres Strait Islander tracks also getting a run every episode and a focus on a local artist, the show will be a great way for local bands and singers to promote their music by getting involved and showing off their talents.

So, if you’re interested in learning some new dance moves from some of the best in the country and hearing some great new Aboriginal and Torres Strait Islander music, keep an eye out for

Move it Mob Style, which may be visiting a town or community near you in 2011.