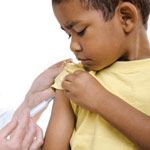 Fewer children are being immunised, which may put them at risk of getting diseases they could avoid.

Australian health authorities aim to have 90 per cent of the population immunised against diseases at any one time. That’s considered a ‘good rate of coverage’ by international standards, but at the moment in Australia, it’s well below that.

According to Dr Emil Djakic, Australian General Practice Network Chair, immunisation rates for four year olds have reduced to about 83 per cent, which is the lowest in seven years.

So what is immunisation? Basically it means both receiving an injection (called a vaccine) and, as a result, becoming immune to the disease.

The vaccine itself may contain a very small dose of a live, but weak, form of the virus or a very small dose of killed bacteria or virus. It may seem strange to be injected with a small dose of a disease you’re trying to avoid, but here’s how it works: the very small amount of virus causes your body’s immune system to kick in as if you had been exposed to the disease but without suffering from the usual symptoms. If you come into contact with that disease in the future, your immune system should respond quickly, in most cases preventing you from getting the full-blown disease, as well as building up resistance to future serious infections.

It’s recommended that young children have a fair few immunisations. There are a couple of reasons for this. While babies are protected against many diseases from antibodies that were transferred to them by their mums during pregnancy, these wear off, leaving children exposed to the risk of serious childhood infections. Unlike adults, children’s immune systems don’t work as well because they haven’t been exposed to as many diseases yet.

Diseases like measles, mumps, rubella, swine flu and pertussis (whooping cough) can be prevented by being immunised in childhood. To find out about all the vaccines available, ask your doctor at your local Aboriginal Medical Service or take a look at the National Immunisation Program Schedule at www.immunise.health.gov.au.

Note, however, that there are changes to this schedule for some Aboriginal and Torres Strait Islander children; in some areas they may require extra protection against certain diseases. (For example, in QLD, NT, WA and SA, children are at risk of getting pneumococcal disease for a longer period than children in other places, so they may need an additional dose of the vaccine between 18 and 24 months.) Ask your doctor what’s recommended for the area you live in.

While no vaccine is 100 per cent safe for all people, all vaccines in Australia undergo years of testing before they’re released and their use is monitored. There can be side effects, but they are usually mild. Common side effects are redness, soreness and swelling at the site of an injection, mild fever and grizzly or unsettled behaviour. Always return to your doctor if you’re worried about a vaccination.

It’s tempting to think that immunisations are the cure-all for diseases, but there are no guarantees. For example, when 100 children are immunised against measles, 5-10 kids could end up getting measles if they’re exposed to someone who has them. However, if those 100 kids had never been immunised and were exposed, then most would catch measles. Diseases like measles can lead to more complicated illnesses like pneumonia.

While there are no guarantees, immunisation is still recommended. The reasoning is that if enough people are immunised, many diseases will die out. One example is smallpox, which due to immunisation, hasn’t been seen since the late 70s. Not everyone chooses to have their children immunised, but the official word from the health authorities is that “The benefit of protection against the disease far outweighs the very small risks of immunisation”.