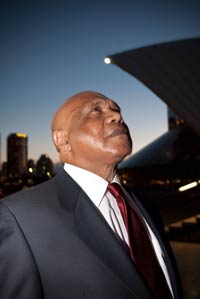 Archie Roach has been awarded one of the most prestigious art prizes in the country, the Red Ochre Award, which recognises outstanding contribution to Aboriginal and Torres Strait Islander arts.

Rhoda Roberts, a key figure in the Indigenous arts world herself, spoke with Archie on behalf of Deadly Vibe about his journey so far and the music that’s touched the lives of so many.

Rhoda Roberts: Congratulations on winning the Red Ochre Award. Did you know you were even nominated?

Archie Roach: I didn’t know I was nominated, so it was a big surprise when the (Australia) Council got in touch with me and I really didn’t know what was going on. I thought, ‘Wow’, because I remember years ago we went up to sing a few songs for a great elder Uncle Bob Maza when he received it one year and I was a bit dumbfounded really when I was told.

RR: It hasn’t been a great year for you, Archie, but I know many have surrounded you and supported you. I remember one of the first times I interviewed you was when you were with the Altogethers. When I hear the song Down City Streets it reminds me of it because it was about that band wasn’t it?

AR: Yeah that’s right. Ruby actually wrote that song, and it was pretty significant because it was the last song on the Charcoal Lane album and it completed that album. We sang it with the Altogethers and it was an Altogethers song. It was one of our most requested songs.

RR: Jamu Dreaming was a very interesting album. You moved on and you were sort of getting more comfortable within the music industry and doing a lot of collaborations… “Weeping in the Forest”, where did that come from?

AR: It was a song for the people that were left behind like our elders and our uncles and aunts and our mothers and fathers, who didn’t know what happened to us. It was inspired by my uncle Banjo Clarke and it was his way of explaining how he felt about the children being taken. Because we used to be down the bush, laughing around, playing games and hide and seek and running down to the river through the bracken barefoot ? he said when we were taken there was no more laughter in the bush and he missed the laughter of the children in the forest. So that’s what that song was inspired by.

RR: What did it feel like when you got the Human Rights Award for “Took the Children Away” in 1990?

AR: I remember it was a special case because Dr Fred Hollows got the Human Rights Medal that year, so it was a great honour. I wasn’t sure what I was doing there at the awards ceremony, but when they started talking about the first time they’d awarded it to a songwriter, they started telling this story about some fella and I realised it was about me. No, it was a pretty special time.

RR: What’s it like to sing without your lifelong partner?

AR: It’s really important, it’s something that I can’t see myself not doing. It’s become so much a part of me, it sort of keeps me going. It’s like, when I first started writing my songs and singing, I didn’t talk much to people at the time and I found I could communicate to people through my songs, and it’s still pretty much the same today. It keeps me going and it’s a way of me celebrating the life of Ruby also, what she stood for and as a people what we really represent as the Aboriginal people of Australia.

RR: If we wrote a film of your life with Ruby, people would probably say it was a bit far-fetched. Do you reflect back to those days on the streets at all?

AR: Oh yes. I never forget. That’s the great thing about it, I think, that we don’t forget where we’ve been or where we’ve come from and our life. Basically I believe we’re the sum total of our experience and that’s what shaped me. Life on the streets ? that is part of my life, what makes me who I am today. If it wasn’t for that life, I wouldn’t have turned myself around and picked myself up and realised what that meant. I can express that in music.

RR: Of course, Archie’s late partner, Aunty Ruby, passed away last year on the 17th of February and it doesn’t feel that long ago?

RR: I feel her all the time, I can hear her sometimes.

RR: One of the big impacts Ruby Hunter had on the music scene was as a female performer, an Aboriginal female performer, but both Archie and Ruby really raised the issue of domestic violence. Why did you pick “Walking into Doors”, Uncle, for Deadly Sounds?

AR: It happens everywhere really, in all societies, domestic violence, and there seems to be a lot of focus on my people even though you see it everywhere, unfortunately. But I knew it really wasn’t our way, it wasn’t really culture or something that I believe we did. We never committed these sorts of things to our women folk or our children. So it was just a song, an important song at the time just to try and help.

RR: It was a taboo subject at the time you wrote it, no-one wanted to talk about the fact that this actually happened in the community.

AR: Of course not, it’s shameful and I suppose to sing about it and actually bring it up was a way to actually talk about it. We had a forum one time called ‘The Walking Into Doors Tour’. Some brothers came up to me and thanked me for that song and how it helped them to turn away from that sort of life.

AR: I’ve got time to sit back and have a bit of a break but, like I said, it’s always something that feeds me, it’s almost like something that I need to do every now and then, because frankly I don’t know what I’d do with myself sometimes if I wasn’t on stage talking to people and singing. I’ve written some new songs and I’ll take a little bit of time off to start recording or pre-production.