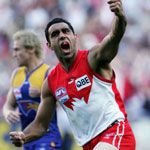 The 28 year-old was required to front the panel after being cited for striking Port Adelaide’s Matt Thomas in last Sundays match at the SCG.

While Goodes had the opportunity to enter an early guilty plea which would have nullified any possible penalty to one match, he chose to contest the charge, arguing that he was only trying to shrug off Thomas when the Power player attempted to tackle him after a free kick had been awarded.

The successful challenge means Goodes will now be able to play in this Saturday’s clash with the Brisbane Lions at the Gabba in what will be his 194th consecutive game, a streak that goes all the way back to 1999 and will equal the mark set by teammate Jared Crouch in 2006.

Goodes teammate and fellow Indigenous star Michael O’Loughlin has also been backed by Swans coach Paul Roos to continue his career next season and become the first Swan to play 300 games.

Michael is already the clubs games record-holder with 272, passing John Rantall in round 14 of last season. His fours goals in last weekend’s thrashing of Port Adelaide moved him past Tony Lockett to second spot on the clubs all-time goal kicking list at 465.