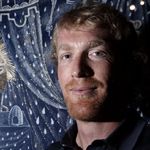 From Rite to Ritual explores the encounter and fragile co-existence between Indigenous and non-Indigenous, or settler cultures. The work highlights the importance of secret and public ceremony and initiation in both cultures; it speaks of the challenges of settlement, and the differences in spiritual enactment and belief.

Danie was born in Mackay, Qld, in 1971 and was educated in South Australia, South Africa, Canberra and England before completing his PhD at the School of Art, National Institute of the Arts, Australia National University. Currently working as Lecturer of Theories of Art Practice at the University of Sydney, Danie’s work had previously been highly commended in the Telstra National Aboriginal & Torres Strait Islander Art Award in 2003 and 2007.

The works will be on display at MAGNT until Sunday, 25 October 2009. Artworks and recordings of the story behind the works in this year’s exhibition will also be featured on a virtual online gallery at www.nt.gov.au/natsiaa