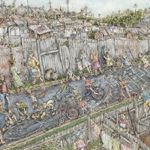 Danny Eastwood was awarded the prestigious prize with his work My Reconciliation. Eastwood has exhibited both nationally and internationally and is a self-taught artist that works across a range of media including sculpture, ceramics, printmaking, painting and drawing.

My Reconciliation is a nostalgic look at urban Aboriginal experience. It is a confident expression of modern Aboriginality and celebrates the way in which Aboriginal communities survived and thrived in the inner city. Based on Eastwood’s personal reminiscing about his childhood, it is witty and humorous and explores an era and situation that is not often explored in contemporary Aboriginal art.

The judges Larissa Berendt, Vic Chapman, and Djon Mundine OAM were impressed by the individuality of Eastwood’s expression, his attention to detail and the fine craftsmanship of the drawing. They also felt that the work made a strong political statement about the importance of urban Aboriginal communities at a time when governments are directing resources to communities in the Northern Territory and away from New South Wales.

The 2008 Parliament of NSW Indigenous Art Prize features a second award, the College of Fine Arts (COFA) Professional Development Award. This Award is supported by the University of NSW, and includes a two week residency and solo exhibition at the EPS Gallery at COFA’s campus in Paddington.

The winner of this Award is Gordon Syron for his painting “… and they never asked us for our land”. This work is constructed from two panels that hang over a canvas stretcher. The imagery of tall ships looming menacingly on the horizon accompanied by the text that divides the two painted panels is a powerful evocation of Gordon’s longstanding commitment to documenting the true history of our nation. With the COFA Award Gordon will have the opportunity to investigate a project during a residency that utilises COFA’s arts and teaching resources that will culminate in a solo exhibition at COFA in 2009.

My Reconciliation by Danny Eastwood

…and they never asked us for our land by Gordon Syron