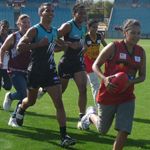 Three hundred students from ten South Australian schools will participate in the second annual Aboriginal Power Cup this year with the Grand Final to be held on August 29.

The Cup is a joint initiative of the Attorney-General’s Department and the Port Adelaide Football Club with support from the South Australian Aboriginal Sports Training Academy and the SANFL.

The Power’s Indigenous players were joined by students from participating schools and Attorney General Michael Atkinson and Government Minister for Youth Tom Koutsantonis for the launch of this years Cup at AAMI Stadium.

“The inaugural Cup was hugely successful so we’re expanding it in 2009. Double the number of students will get active and learn how to lead happy and healthy lives,” Mr Atkinson said.

With a competitive football carnival as its centrepiece, the Cup focuses on engaging young people in education, promoting healthy lifestyle choices and developing teamwork, leadership and life skills.

The Aboriginal Power Cup was developed in response to Monsignor David Cappo’s To Break the Cycle report and is based on a successful U.K. model. The Cup is designed to give students the information and motivation to lead happy and healthy lives free from crime.

“The Aboriginal Power Cup has already kicked goals – on and off the field,” Minister for Youth Tom Koutsantonis said.

“Last year, school attendance increased up to 23 per cent among students who took part in the Cup. That means a better education and a brighter start to life for these young people,” he said.

The Cup program includes separate boys and girls teams from each school. It will culminate in a carnival at Alberton Oval in August. The Grand Final will be played at AAMI Stadium as a curtain-raiser to the Power v Kangaroos match on Saturday, 29 August.

The State Government is investing almost $300,000 over three years in the Aboriginal Power Cup as part of a strategy to prevent young people becoming involved in crime.

“Fun is the best way to show young people that there are alternatives to crime and unhealthy lives. Through sport these students are learning skills that will help them deal with life’s troubles and steer away from danger,” Mr Koutsantonis said.

“Last year, one student commented that the Cup was the best two days of his life so far. I’m sure everyone involved this year will have just as much fun.”