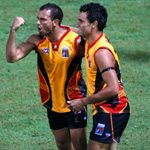 The Indigenous All Stars have trounced the Adelaide Crows, running away with a comprehensive 14.13 (97) to 6.7 (43) victory at Marrara Oval in Darwin last night.

Captained by Andrew McLeod playing against his club side, the All Stars adapted to the tropical wet conditions far better than the Crows, racing to a 25-point quarter-time lead after Daniel Motlop opened the goal scoring account for the Indigenous side in just over a minute of play.

The All Stars were sparked in attack by Kangaroo’s player Matt Campbell who was eventually named best on field while McLeod showed flashes of brilliance in the second term.

After leading at the half by 23 points, Tiwi Islander Austin Wonaeamirri notched the first goal of the second half and the All Stars quickly blew the game wide open in the third term – jumping to a 39-point advantage.

Matt Campbell was humbled to be awarded the Polly Farmer medal at the end of the match.

“There were a lot of good players out there,” he told reporters.

“We didn’t really know what to come up with because of the weather.

“After the loss to Essendon (last year) we wanted to bounce back and we knew Adelaide was going to be a really good side … (but) we didn’t really give them a sniff.”

Rookie coach Chris Johnson praised his sides performance and was particularly pleased with the play of the younger players.

“A lot of those kids haven’t even played for their clubs yet,” he said.

“They have really stepped up to the mark … It’s just unbelievable what what some of those boys achieved tonight.”

Essendon remains the only AFL club to have defeated the All-Stars.